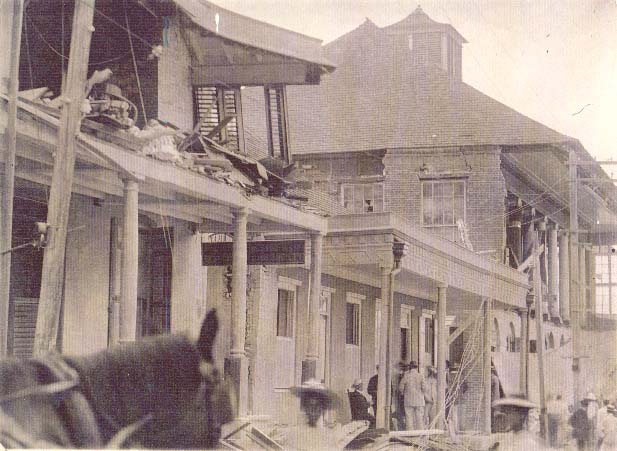 On January 14, 1907, an earthquake measuring 6.5 on the Richter Scale hit Kingston, killed approximately 1,000 people, and caused approximately $30 million in material damage ($823.18 million in 2019 million). The earthquake occurred at about 3:30 pm and triggered a tsunami between six and eight feet in height. The earthquake was considered to be one of the world’s deadliest at the time. There was damage to every building in Kingston, and the fires that started as a result of the disaster burned for three days before any effort at containment could be made. The combination of disasters left some 10,000 people without homes. The tsunami occurred on Jamaica’s north coast and totaled a maximum height of eight feet. 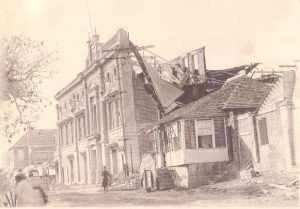 Most of the damage was located at Kingston, Buff Bay, and Annotto Bay. About 85 percent of Kingston’s buildings were destroyed by the shaking and the fire that followed in the warehouse and business districts. The passenger steamer “Port Kingston” that was being repaired in Kingston Harbor was threatened by fire at the nearby wharf, but a temporary repair allowed the ship to move to a safer location. In Port Maria, the earthquake destroyed a suspension bridge.

The main shock of the quake lasted approximately 35 seconds following some minor tremors. There was a roaring sound as the ground shook. There were 80 aftershocks recorded as of February 5. The strongest aftershock occurred on February 25. The earthquake’s epicenter was not accurately located as the only seismograph on the island became nonfunctional due to the quake itself. It is believed the quake was centered on an eastward portion of the South Coast Fault Zone, within the Wagwater Belt, or in the Blue Mountains. 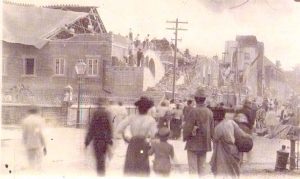 The shaking was most intense in areas built on unconsolidated sands and gravels. Sandblows and surface faulting were associated with areas of flooding to the east of Kingston and the Palisades’ tsunami was seen along much of the north coast at Hope Bay, Port Antonio, Orange Bay, Sheerness Bay, Saint Ann’s Bay, Port Maria and Annotto Bay. Sea level at Annotto Bay dropped by nearly 10 feet as the sea withdrew some 260 feet before returning at over six feet above normal and flooding parts of the town. 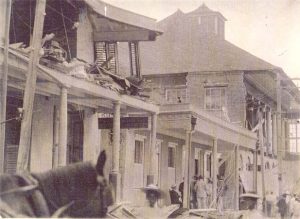 In the aftermath of the quake, the “Port Kingston,” the only passenger ship in the harbor, was used as a hospital, with extension to the adjoining wharf. Kingston Public Hospital had lost its water supply but continued to provide care throughout the day and following night. Three warships from the United States brought help and supplies on January 17.

The island of Jamaica is located in a complex zone of faults that form boundaries between the Gonâve Microplate and the Caribbean tectonic plates. To the island’s east is the Gonâve Microplate and the Caribbean Plate. To the east of the island the main fault is the Enriquillo–Plantain Garden fault zone; to the west is the Walton fault zone. Both of these are major sinistral strike-slip faults.

Photo provide to Jamaicans.com by the family of Dr. John deMercado