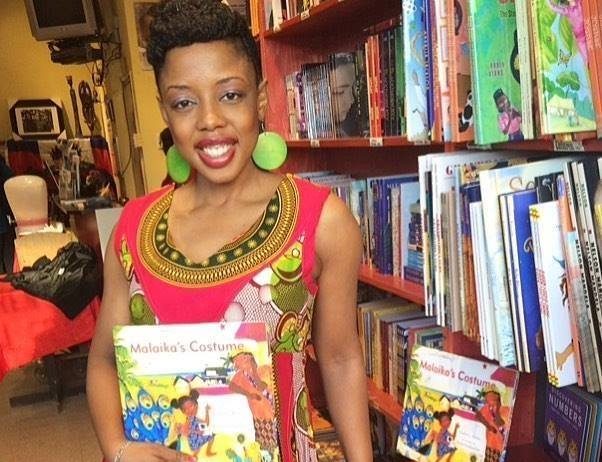 Nadia L. Hohn, B.A. (Hon.), B.Ed., M.Ed. is a writer, educator, performer, and aspiring illustrator. The multilingual award-winning author of six books, including the recent A LIKKLE MISS LOU: How Jamaican Poet Louise Bennett Coverley Found Her Voice. Her 7th book, part of her Malaika… series, is due in 2020. She started a vegan blog in 2011 to track her thyroid cancer journey and was the editor for the Thyroid Cancer Canada newsletter 2011 to 2012. From 2001 to 2003, Nadia Hohn founded and ran a nationally touring annual film festival called, ICED IN BLACK: Canadian Black Experiences on Film. Nadia was an inaugural teacher at the Africentric Alternative School from 2009 to 2016 and has been a public-school teacher in Toronto since 2003. She is also an active community member in various roles, which included a former member of the 42 year old Caribbean folk choir Heritage Singers and more presentation as an advocate for diversity in children’s literature as a planning team member of the first annual Festival of Literary Diversity (FOLD) Kids Children’s Literary Festival in September 2019. She has presented across Canada, the United States, the United Arab Emirates, the United Kingdom, Trinidad, and Jamaica.

1. What is your connection to Jamaica?
My parents were born in the parish of St. Ann, Jamaica before immigrating to Canada in the 1970s. I identify as Jamaican-Canadian.

2. How long have you been writing?
My earliest memory of writing was when I was six years old. I had to write a daily journal at school. Around the age of seven, I discovered that I could write and create my books about a topic. Just give me a pencil, paper, and a stapler.

3. Tell us about your new picture book?
A LIKKLE MISS LOU: How Jamaican Poet Louise Bennett Coverley Found Her Voice is a celebration of the life of Miss Lou and her contributions to the Patois language of Jamaica. The story focuses on her early influences and experiences while growing up in Jamaica, which was the seeds of what would eventually become her illustrious career.

4. What age is Miss Lou in the picture book?
In this book, Miss Lou is about twelve or thirteen years old. 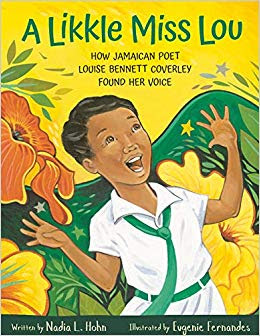 5. Did you ever get to meet Miss Lou?
No, unfortunately. I did not know that she lived in Toronto (particularly the region of Scarborough) in the last twenty years of her life until she passed away in 2006. I wish that I had known that Louise Bennett lived in the same city as me. For two years, I sang with the Heritage Singers, a Jamaican folk choir based in Toronto that has been going for 41 years. This choir has performed with Louise Bennett-Coverley when she was alive.

6. What do you most admire about Miss Lou?
I admired that Miss Lou was a very intelligent person. In interviews, she intellectually delivered interviews and analysis of her work and Jamaican cultural practices, combining historical and cultural information in a scholarly and academic fashion. However, her poetry, folksongs, and storytelling were the vernacular of the Jamaican people, giving them voice, and legitimacy regardless of socioeconomic status or skin colour.

I admire that she was also a world traveller, having lived in at least six different cities and 4 countries across the Jamaican diaspora— Jamaica (Kingston, Highgate), US (Brooklyn, Fort Lauderdale), UK (London), and Canada (Toronto). I’ve visited 21 countries so far and lived in 3 so far— Canada, US, and UAE.

I admire her tenacity. Louise Bennett was the first Black student at the Royal Academy of Dramatic Arts (RADA) and the first Black person to host a show on the BBC Radio. Although she was a young, single, Black woman from a small island country, this did not stop her from entering these spaces.

7. What is your favorite Miss Lou works whether it is a story, poem, recording or video?
This is a difficult one. I like Education, Studiration which I taught to my Grade One students years ago. I memorize and perform this one still. I also like when she talks about meeting a Jamaican, that she knew from back home, while in Paris.  I also love the folk songs that she helped gather like Coconut Woman and Hill and Gully Rider.

8. Your book is in Patois and English. Did you speak Patois in your home?
Not really. My parents discouraged my siblings and I from speaking Patois inside or outside the home. But, behind their backs, my sister and I would say random Patois words and phrases because they were so fun to say. Then when I went to high school in the 1990s, I encountered a lot more students from Jamaican and other Caribbean backgrounds. There, I heard Patois spoken all around me and plus, some popular dancehall songs becoming more mainstream and chart-toppers, e.g. Shabba Ranks, Cutty Ranks, Chaka Demus & Pliers, Patra, Beenie Man, Heavy D. I would watch the music videos and listen to reggae on community radio so that I could memorize these songs. Slowly, gradually, I began to learn how to speak Patois more fluidly.

9. You mentioned in another story that Patois helped you teach kids. Can you explain?
As a teacher, I am always looking for a variety of things to engage students. When I taught Grade One (6-7-year-olds), I would have my students learn a song or poem each week. This helps them to gain fluency in reading aloud and adds to the experience of using words that they are familiar with in an enjoyable way. At the time, I was teaching at the Africentric Alternative School— the first publicly-funded school of its kind in Canada. Most of my students were of Jamaican or Caribbean heritage so many already had some familiarity with hearing Patois. So, I taught them Education, Studiration by Louise Bennett-Coverley. Oh, how they loved saying the words of this poem.

11. What inspires you to write?
Everything and anything. Writing is like breathing for me.

12. Apart from your interview with us, what has been a pinch-yourself moment so far?
Being on the cover of the entertainment section of the Toronto Star weekend edition on August 17th. I was so honoured to have my whole career profiled but most importantly seeing Louise Bennett profiled so well, meant a lot, especially since September 7th would have been her 100th birthday. This means that Louise Bennett was getting her “proper due respect” and younger generations will know about her since so many do not know.

Another moment is when I spoke and communicated with Mervyn Morris, a Jamaican leading academic, editor, and poet who wrote the only other book biography about Miss Lou/Louise Bennett Coverley. It meant a lot to me that he was interested in and encouraging of my project as well as the support of Louise Bennett’s son Fabian and her estate.

Also, physically holding my book in my hands. It took me seven years from idea to drafts, research to submissions to publishers and agents, and then to try to get it all done in time for Miss Lou’s 100th anniversary it was quite a feat. A lot happened in my personal life during this time so holding A LIKKLE MISS LOU felt like a culmination of so many things. I definitely felt the feelings.

13. What inspires you to write new skits and stories?
Life, my students, new information, fascinating people who need to have their stories written, also the lack of diversity in books for young people. Our children really need more books about portraying characters that look like them or with similar lived experiences to build self-esteem and navigate life’s challenges. Children need to see more diverse stories so when they read books, they can develop empathy for people whose lives are different than their own.

14. Will we see some of the skits in your book become a theatre production?
For the last few years, I have been writing a play manuscript based on my Malaika… picture book series (Malaika’s Costume 2016, Malaika’s Winter Carnival 2017, Malaika’s Surprise 2021).  So yes, I would love for these and my other stories to be on the stage.

15. What are your 3 favorite books of all time?
This is a difficult question.  I read extensively. Last year, I read almost 170 books and this year I am at almost 140 so far. I read children’s and young adult books, novels, biographies, and the Bible so I really cannot pick just 3.

From childhood to teen years:
– Motown & Didi by Walter Dean Myers
– Honey, I Love by Eloise Greenfield
– Just as Long as We’re Together by Judy Blume

16. Seven-day, six-night, all-expense paid, my vacation destination is…
Ghana, Portugal, or Sri Lanka. I have been to all of them, but I hope to revisit. For new places— Senegal, Colombia, and New Zealand.

17. My favorite guilty pleasure is…
Social media and it used to be the Wendy Williams show. Plus, milk chocolate and desserts. Like Miss Lou, I have a sweet tooth.

18. Growing up my hero was…
Martin Luther King, Harriet Tubman, and Cree Summer.

19. On behalf of the readers of Jamaicans.com, thanks for providing us with this interview. Do you have any closing thoughts for our readers?
Please buy my book and support authors. If not for you, then for a child you know, or buy one and then donate it to a classroom, community organization, or library. Publishing is a business and our dollars and voices help to determine the types of books that get published, nominated for awards, reviewed, stocked on bookshelves, and distributed.