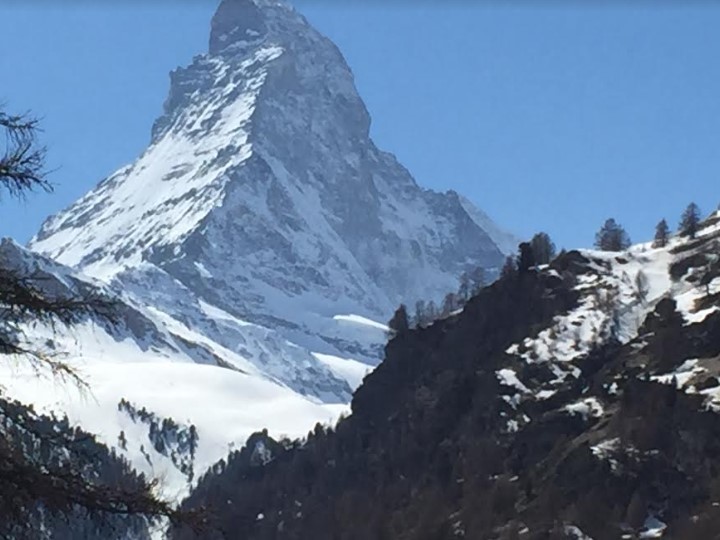 In 2001, the highlights of the trip were the Dying Lion monument, the Chapel (wooden) Bridge, a boat cruise on Lake Lucerne AND a gondola ride up to the snow capped Mt. Titlis in central Switzerland. On Mt. Titlis we walked through the glacier caves.

On my second visit, two of us did a short stop in Basel and Lucerne and did a walking tour. We visited the Dying Lion monument for the second time.

In April of this year we did a tour of the Rhine, Swiss Alps and Amsterdam.  Our cruise disembarked in Basel and this would be my second time passing through Basel and my third trip to Switzerland.  From Basel we went to Lucerne and visited the Dying Lion monument for the third time. At the Dying Lion monument

A scenic drive and walking tour of Bern was next…along with Lakeside Lucerne. In Bern I found a Jamaican guy originally from St. Elizabeth operating a food stand at the street market. I had a chicken patty and mango punch from his stand. He went to Switzerland,  got married to a Swiss girl,  has two children and lives in Bern permanently. He visits Jamaica every year to see his mother. Sadly, I forgot his name.

From Bern we went to Jungfraujoch “Top of Europe “at an elevation of 11,371 feet to the highest railway station in Europe. This trip was on a cogwheel train going through the Eiger tunnel.  At that height, I felt the effects of altitude sickness but it did not last long.

From Bern, a post trip would take us by train to Zermatt.  In Zermatt, we stayed in the village and had a great view of the Matterhorn. We were also lucky to see the start of the Race of the Glaciers (Patrouille des Glaciers). This is held every other year in even-numbered years: 2014, 2016, 2018.  There was a marching band and a ceremony to start the race. We watched the barriers taken away as a mass of contestants moved forward.

From our balcony we took some good photos of the Matterhorn Matterhorn in the evening From Zermatt we took the Glacier Express. This is a direct train from Zermatt to St. Moritz. The train is also referred to as the ‘slowest express train in the world’ as the journey takes about 8 hours. The reason for this slow pace is that the train winds its way through the Alps, through narrow valleys, tight curves, 91 tunnels, and across 291 bridges. On the Glacier Express

Our next stop was St. Moritz, a holiday resort. The lake was frozen and people drove on it.  It was very peaceful staring across the lake at sunset. From St. Moritz we went to Zurich and before heading home.

We were booked on Air France and they went on strike two days before our departure We were fortunate to get on Swiss Air and made it back to LAX in a shorter time.

I have seen Basel, Bern, Lucerne, Zermatt, St. Moritz and Zurich. I have seen enough of Switzerland. Besides, I am too old to run to catch trains.