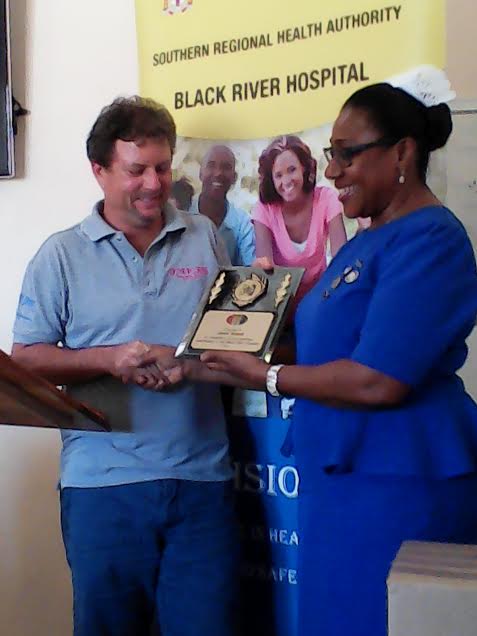 Providing quality healthcare has been at the forefront of healthcare delivery within the Southern Regional Health Authority, which was publicly awarded when Proprietor of Jakes Hotel Villas and Spa and Jack Spratt Restaurant in Treasure Beach, St. Elizabeth, Mr. Jason Henzell, officially handed over a refurbished two bedded private suite to the Black River Hospital (BRH) valued at $250, 000.00.

CEO of the Black River Hospital, Mrs. Diana Brown-Miller explained that Mr. Henzell, while training for a marathon event suffered an injury and was taken to the hospital for treatment in October 2016 and was very pleased with the care received. She added that he was also very grateful when the staff gave up their rest area to house him overnight.

“To show his appreciation, Mr. Henzell, who has been donating to the hospital for many years, pledged to have the room upgraded and in March 2017, in celebration of the 24th anniversary of Jakes Hotel Villas and Spa, Mr. Henzell handed over a cheque for $250,000.00 to execute the necessary repairs” Mrs. Brown-Miller added.

BRH Acting Senior Medical Officer, Dr. Sheriff Imoru at the handing over ceremony on Monday June 19, noted that the suite will serve as an income generator for the hospital adding that patients have been requesting care in a private suite. The Senior Medical Officer said the donation will also encourage others to invest in the hospital once they learn of the improvements made.

Mr. Henzell reiterated his appreciation for the quality care received and committed his continuous support to the hospital. He also expressed his satisfaction with the finished product and admiration at how much the hospital has been able to accomplish despite limited resources. Mr. Henzell implored others to come on board and to assist, despite the magnitude of the support.

Mr. Henzell, since his hospitalization, has so far donated 28 wheelchairs to the hospital as well as sponsored a staff gathering in 2016.