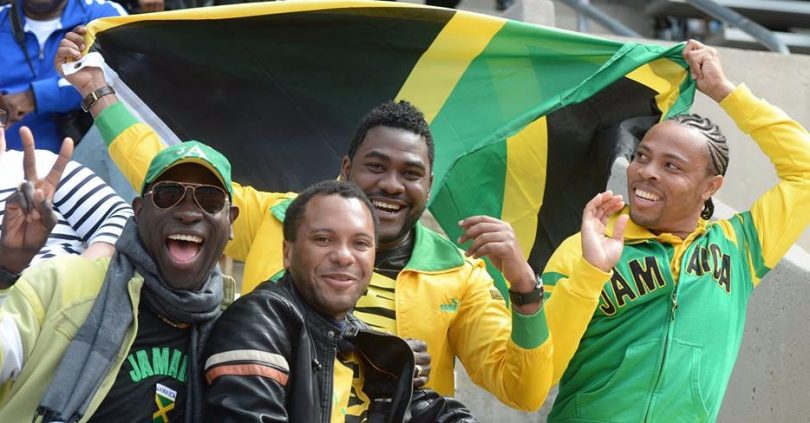 The annual Penn Relays, the oldest and biggest track and field competition in the world, always displays a lot of Jamaican flair, from the reggae music and jerk chicken featured at the event to the large numbers of dreadlocked fans speaking with a significant lilt to their language. The 123rd staging in 2017 was no different and may even have shown extra Jamaican flavor as the island’s athletes once again dominated the competition. According to the Philadelphia news media, the 2017 Penn Relays felt like a “home meet” to many of the Jamaican participants.

The warm weather helped set the tone, and there was an especially large number of people wearing the black, green and gold colors of the Jamaican flag in attendance. Once the competition began, the lowest section of the stadium at Franklin Field was a sea of the island nation’s colors and a feeling that “something fast” was about to appear.

Then Jamaican Elaine Thompson carried the baton for her team in the 4×400 meter race in the USA vs. The World series and raced the distance “like a female version of the legendary Usain Bolt. The amazing thing was that Thompson, 2016 Olympic champion in the 100 meter and 200 meter events in Rio and the current “World’s Fastest Woman” was only a warm-up for Jamaica’s Calabar High School team.

While Thompson’s anchoring brought her team the win in the first event of the six-race competition was world-class in terms of speed and help Jamaica to its first three-victory performance in the 18 years of the USA vs. The World series, Calabar High School really highlighted the dominance of Jamaica at the Relays The performance of the Calabar team in the high school 4×100 Championship of America race clocked an amazing 39.00 seconds. Dejour Russell, the team’s anchor, said, “We wanted to put on a show.” With that time, the team, which comprised Tyreke Wilson, Christopher Taylor, and Michael Stephens in addition to Russell, would have been second in the college men’s 4×100 champion and second in the USA vs. the World men’s 4×100. It is an astonishing achievement for a high school team.

Calabar, a chiefly male school located in Kingston, was established by the Jamaican Baptist Union in 1912 and has since produced five Rhodes Scholars in addition to being famous for its track and field program. Calabar has participated in the Penn Relays for many years, along with other Jamaican high schools like Kingston College, Camperdown, St. Jago’s and Wolmer’s.