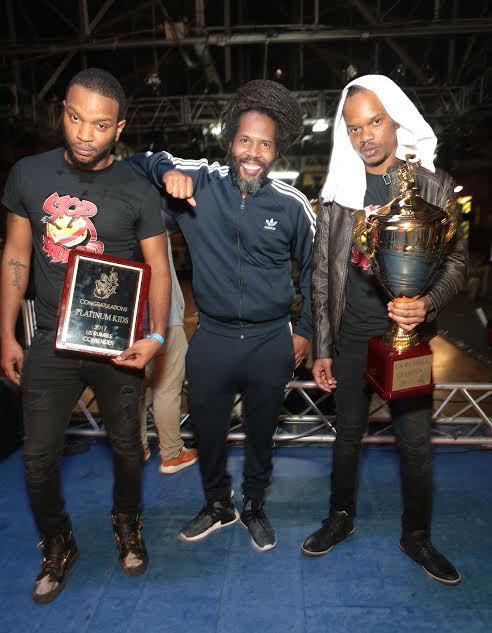 One of the most exciting aspects of reggae culture took place inside Amazura nightclub in Queens, New York last Saturday. It was the second annual US Rumble nationals where seven sound systems entered a musical “war” for a spot in the international Irish and Chin World Clash competition. All seven sounds entered the Amazura stage hungry for the coveted title of America’s National Champion Sound, “US Rumble Champion”, yet only one sound could walk away with the title and that went to Bronx, NY Platinum Kids.

New York’s Platinum Kids sound, featuring the dynamic duo, Paul and Marcus Gavin won the US Rumble championship and a slot in the highly acclaimed World Clash competition, to be held later this year. Platinum Kids, known as a juggling sound entered the US Rumble competition as the underdog. Being the only sound on the line up with the least clash experience many considered them less likely to win and an early exit during the competition. Yet, for Paul and Marcus the key element to any performance especially a competition judged by the crowd is to make sure they entertain the audience in front of them. “We may not have the deepest dub box or clash extensively, but over the years we have learned that its all about the crowd, mek sure you entertain them to the best of your ability and win them over” says Marcus the MC of Platinum Kids.

The competition was not an easy one as Platinum Kids competed against the defending US Rumble champion Innocent Sound (Florida) and the runner up of the inaugural US Rumble – King Shine (New Jersey). Both Innocent Sound and King Shine are winners of numerous sound competitions with several titles under their belt . Also in this years US Rumble competition were four other decorated sounds in the sound clash arena, One A Day (Philadelphia), Riddim Force (Florida), Kosmik (Brooklyn, NY) and Black Magic (Atlanta) who met with Platinum Kids in a nail biting “tune fi tune” face off.

During the final round, “tune fi tune”, which would declare the winner after the best of 10 songs, Platinum Kids at 3:44 am held the lead with a score 4-0, but Black Magic quickly gained momentum. After playing a dubplate from the late Garnet Silk ‘Evacuate’, Black Magic immediately won the crowd and came back to even the score 4-4, but Platinum Kids was up for the fight. Platinum Kids went on to play Carl Dawkins ‘Satisfaction’ (dubplate) followed by a Mighty Diamond ‘I Need A Roof’ (dubplate) and sealed the championship, winning 6-4.

“First we want to say thanks for the opportunity given to us by Irish and Chin, music is not a hobby for us its a passion and something we take seriously. We’ve been playing music for over 17 years now so for us this is one a dem achievements we are humbled by and look forward to expanding the brand on an international level” says Paul the selector of Platinum Kids.

Enthusiastic over US Rumble and Platinum Kids win, promoter Garfield “Chin” Bourne says, “Platinum Kids displayed a combination of qualities that ultimately led them to the victory, including strong speech, entertainment and strong mixture of dubplates  mixed with a ‘lethal’ 45 selections.”

After earning their spot in this years World Clash, Platinum Kids await the names of the other contenders who will represent UK and Europe.