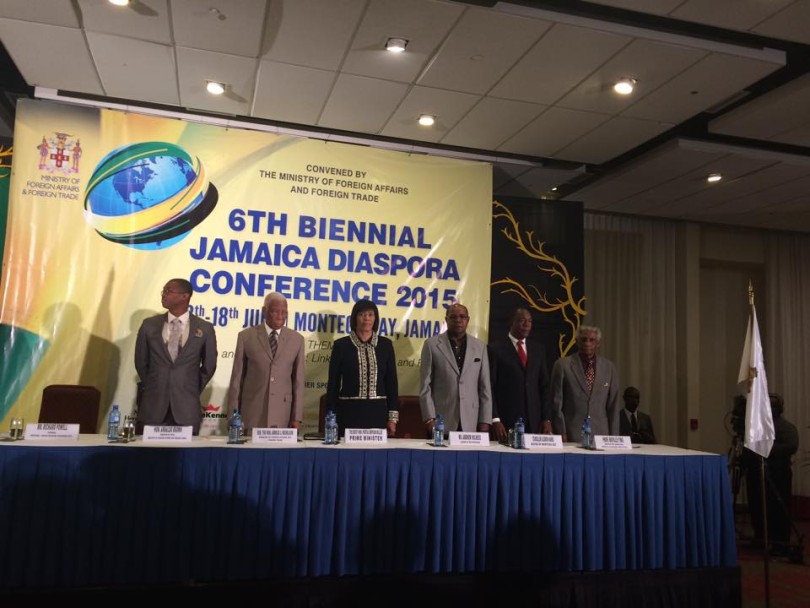 Montego Bay Mayor, Glendon Harris, welcomed the conference delegates to the city with the call to “Unite for growth and prosperity”. Mr Harris closed his speech with the call to action for every delegate to “Make everyone aware of the island”.

Hon. Edmund Bartlett gave the welcome on behalf of the opposition JLP and stated that his political party is proposing that Jamaicans overseas get to vote as a constituent.  Mr. Bartlett stressed that “the Diaspora are key stakeholders and important to Jamaica’s development”. He closed by starting that opposition wants to “engage the Diaspora and bring them front and centre” in their involvement in the Jamaica. Prime Minister, the Most Hon Portia Simpson Miller, lauded the Jamaica Diaspora, for its influence on the world and their support for projects in Jamaica. The official opening ceremonies was held in Monetgo Bay yesterday at the Hilton Rose Hall Resort and Spa.

“I know the sacrifices that you, the members of the Diaspora endure at times to ensure that family members back home are assisted.  I commend the Diaspora Education Taskforce and the Hospital Liaisons, for working closely with the Ministries of Education and Health, “ said Prime Minister, the Most Hon. Portia Simpson Miller, “In so doing, they have contributed an estimated US$10 million dollars over the past three years”

The Prime Minister mentioned a new government policy with the main goal being to facilitate the Diaspora’s involvement in the development of Jamaica and address the issues that affect Jamaican overseas. The policy was also focus on Brand Jamaica which the government believes can be maximized through our world.

“We have the potential to derive substantial economic benefits from our creative industries. Our country enjoys enormous international acclaim derived from the achievements of our athletes, musicians and cultural icons. The same is true for our sought-after foods, and high quality, world famous products such as Jamaican rum, coffee and jerk.”

The Prime Minister mentioned that the government will never take the Jamaica Diaspora for granted and encouraged the delegates to enjoy Jamaica.

“I wish for you successful deliberations throughout the week. For those visiting, enjoy your stay and soak up as much as you can of Jamaica’s warmth and beauty.”

Here are some quotes from delegates who attended the reception:

The wide representation of the Jamaicans in the Diaspora from the almost every continent is a testimony to the power of Brand Jamaica and the commitment of it’s people to make a positive contribution to the growth & development of the country” s Janice McIntosh, Chief Representative officer Jamaica National Building Society Florida.

“I felt like this was history in the making and a deepening & advancing of the Jamaica Diaspora Social agenda” Heather Chisholm.