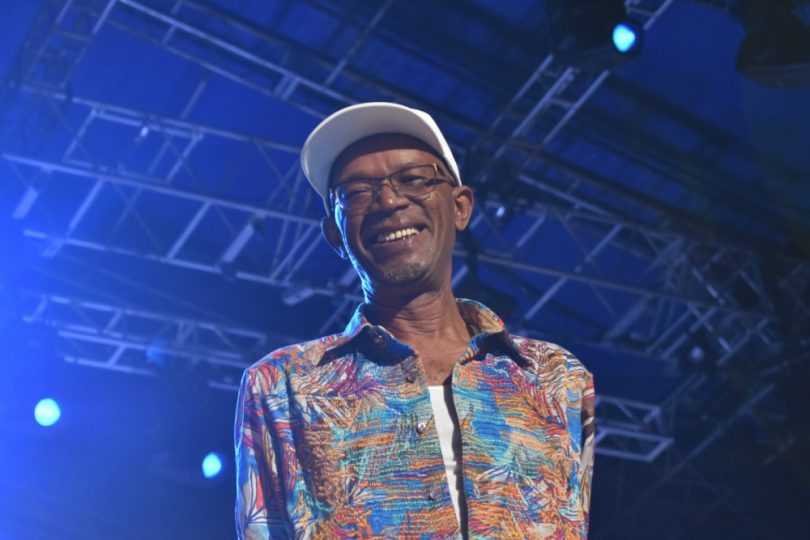 The Reggae Sumfest Festival, held annually in Montego Bay, Jamaica surely got off to a lively and comedic start, courtesy of what has become one of the festival’s marquis events in recent years—the World Sound System Clash.   On the following night, Jamaica’s hottest dancehall acts took to the stage to show off their lyrical deejaying prowess and dancing talents. And for the first time in the festival’s history, Sumfest’s Inspire Awards, which took place at the luxurious Iberostar Hotel and Suites, honored selected individuals and groups that have made significant contributions to the growth of Reggae Sumfest over the years as well as to the development of Jamaican music in general.  The first-time awardees included iconic figures and stalwarts of the reggae music industry—Bob Andy, Chris Blackwell, Beres Hammond, Sly & Robbie, Chronixx, and Beenie Man.  Sumfest then ended on a high note with headline acts for the closing night featuring Beres Hammond, Maxi Priest and Damian “Junior Gong” Marley. 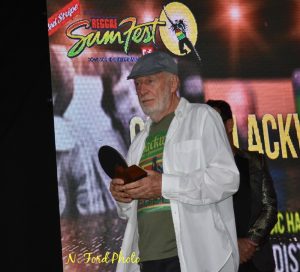 The inaugural Inspire Awards was held in a grand red carpet affair at the Iberostar in Rose Hall on the outskirts of MoBay.  The award ceremony honored the reggae music industry’s crème-de-la-crème which consisted of a number of living icons where artistry, songwriting, composers and performers are concerned.   Bob Andy, the legendary lyricist, composer and singer was awarded for having inspired the sounds of so many artists while being also recognized one of Jamaica’s finest musicians ever. And to the delight of the audience, half way through the awards ceremony he dished out an unexpected performance and crooned a few of his timeless hits, including ‘Too Experienced’ and ‘I’ve Got To Go back Home’.  Thereafter, dancehall entertainer, Beenie Man, was one of many who took the opportunity to give a handshake to Bob Andy in thanking him personally for his invaluable contributions to the landscape of reggae music.

Chris Blackwell of the famed Island Records was lauded for his stellar and long standing contribution to what undoubtedly culminated in the recognition of Jamaican music—including Ska and reggae—the world over.  As the founder and CEO of what has been regarded as one of the United Kingdom’s most acclaimed music recording labels, Mr. Blackwell is arguably the single person most responsible for not only turning the world on to reggae music, but also in launching the careers of Bob Marley, Grace Jones, and U2.  What’s more, he produced many classic albums, including Marley’s ‘Catch A Fire’ and ‘Uprising’.  In 2001, Chris Blackwell was inducted into the Rock and Roll Hall of Fame.

Known as the ‘Riddim Twins’, maestro studio producers Sly & Robbie were given an inspire award on account of being cited as two outstanding talents to rise from the Jamaican music scene over the past 40 years.  Although they could not attend the awards ceremony in person, Sly & Robbie graciously expressed their gratitude via a video message that was played for the awards ceremony audience.  And for his lifelong and tireless dedication to reggae music, Beres Hammond was fittingly handed the ‘Lifetime Award’.  Among the other noteworthy Inspire awardees was King of the Dancehall, Beenie Man, who was all smiles in accepting the ‘Sumfest Legend Award’. In his acceptance speech, the audience was amused by Beenie Man who, in expressing his gratitude for his God given musical talents, stated that apart from doing music he is fairly limited otherwise.  “I cannot patch a shoes or even change a car tire”, Beenie joked.

Legendary Japanese sound system, ‘Mighty Crown’, also known as ‘the Far East Rulaz’ indeed ruled the sound system World Clash in dominant fashion as they emerged victorious in the competition, which was held at the Pier One Entertainment Complex in MoBay.   The jam-packed venue featured the likes of a number of sound systems facing off against each other in a battle for musical supremacy. Among them were not only Might Crown, but also Tony Matterhorn, Pink Panther, and Ricky Trooper. The tune juggling competition consisted of several rounds, with the first serving as a warm-up and the second round resulting in eliminations of the under performers in the opinion of the on looking patrons.   After the elimination round, it was Mighty Crown and Jamaica’s very own, Tony Matterhorn who the crowd selected as finalists. In the end, though, Japanese selectors Masta Simon and Sammi T hoisted the 2018 World Clash trophy in a decisive victory over Tony Matterhorn after selecting vintage tunes from Super Cat, Beres Hammond and Jimmy Cliff to win over frenzied crowd.

Rygin was King of Dancehall Night 2018 that Sizzled Til’ Dawn

On Dancehall Night, Montego Bay’s own, Rygin King, in splendid fashion held steady the attention of a swollen Catherine Hall Entertainment Center crowd.   Daybreak it was, yet Rygin King proved the strongest of his two other dancehall contemporaries also hailing from Jamaica’s second city as it’s widely referred to—Tee Jay and Tommy Lee Sparta. Clad in an all-white jeans outfit with some awkward looking colors splashed here and there, Rygin King garnered numerous forwards marked by the almost deafening cacophony of vuvuzelas being blown alive by the delighted audience.   Then all hell broke loose when Rygin King performed his chart topping and infectious hit song, ‘Tuff’.

And if that wasn’t enough, a slew of other dancehall acts delivered sizzling sets.  Crowd favorite Rastafarian singjay, Sizzla, impressed in spouting gems—from his enviable vault of hits spanning decades—such as ‘Good Ways’ and ‘Just One of Those Days’.   Then, Clarendon-born I-Octane, who was not billed on last year’s Sumfest, let the festival organizers know that he took to being left out of the action to heart, and thus he was back with a vengeance.  I-Octane surely gave a signature performance, as he picked up and hauled a metal trash bin from nearby the stage’s edge all the way out yonder to the middle of the crowd. He even scaled a fence or two with it before he flipped it upside down and stood on top of it to deliver perhaps his best ever performance at Sumfest.  Still filled with adrenalin, I-Octane afterwards became somewhat emotional in being commended on stage by the Sumfest organizers in appreciation of his 10 years of appearances on Reggae Sumfest.

As Dancehall Night progressed from Friday into Saturday morning, not surprisingly the name of the incarcerated deejay, Vybz Kartel, was not only on the minds of many of the artists performing but also on their lips as they called for his release from prison for various reasons.  And even though Vybz Kartel—real name Adidja Palmer—has been locked away, he has nonetheless managed to have kept on recording songs from the inside, and the masses would argue that Kartel is the undisputed King of the Dancehall in Jamaica today. Among the artists making a plea for his release was his former protégé, Popcaan, who also happened to be one of the night’s masterful performers—especially after unleashing hits such as ‘We Pray’ alongside Dre Island.  Other notable acts who contributed to strong showings at Dancehall Night 2018 were: Spice, Bounty Killer, Agent Sasco, Aidonia, Ding Dong and his Ravers Clavers dancers—who energetically showed off their latest dance moves such as the ‘Flair’ and ‘Lebeh Lebeh.’ 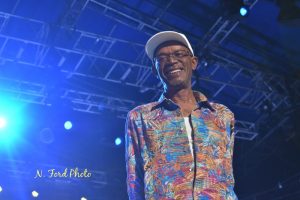 The headline acts billed to perform on the closing night of Reggae Sumfest 2018 were undoubtedly Beres Hammond, Damian “Junior Gong” Marley and Maxi Priest.   Maxi Priest, donning a white hat and sunglasses with his pant legs rolled up to almost to his knees, wasted no time in diving deep into his seemingly bottomless well of seminal hits, such as ‘Close to You’, ‘Wild World’, ‘House Call’ (a collaboration with Shabba Ranks), ‘Best of Me’, and ‘Just a Bit Longer’. 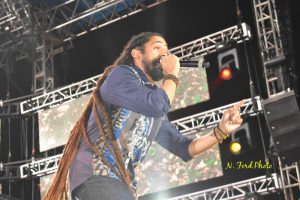 Soon thereafter, it was time for Damian Marley, who that same night turned 40 years old and, in celebrating his birthday, the one known as ‘Jr. Gong’ seemingly could do no wrong as he nailed the crowd with hit after hit—including, ‘Beautiful’, ‘Affairs of The Heart’, and of course, his superb renditions of his late father’s tracks, ‘War’ and ‘Could You Be Loved’.   But before bringing the house down with his smash-hit ‘Welcome to Jamrock’, Jr. Gong shared a touching moment with his son, Elijah, who joined him on stage and gave him a live birthday present by way of serenading his dad in singing ‘I Just Called to Say I Love You’—a cover of Stevie Wonder’s masterpiece.

Fresh off of receiving his ‘Lifetime Award’ just a couple of days earlier, Beres Hammond was in great spirits and was all smiles throughout his scintillating performance.  The crowd seemed to get louder and louder with every classic hit song that Beres bellowed out. Beres was applauded in raucous fashion and given a standing ovation by the densely packed crowd as they reacted to ‘Sweet Lies’, ‘No Disturb Sign’, ‘Step Aside Now’, ‘What One Dance Can Do’, ‘Putting Up a Resistance’, and ‘Rock Away’—just to name a few of the songs he served up—all the while grinning from ear to ear.  As many had predicted, including Sumfest organizers, the state of public emergency that casted a pall over Mobay and its surrounding areas in recent months, ostensibly had no adverse effect on this year’s staging of the annual Reggae Sumfest music festival.   And with such a strong turnout this year, reggae music fans and lovers will have even more incentive to return next year for the festival’s 2019 staging.