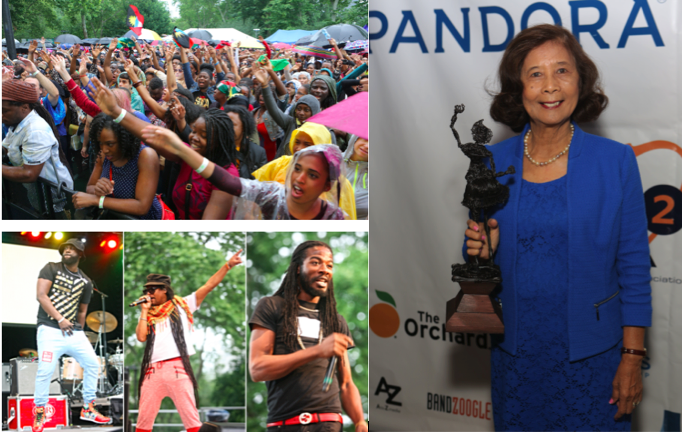 This past Saturday (June 27), VP Records teamed up with SummerStage to throw a historic concert in NYC’s Central Park. The event, which was sponsored by the Jamaica Tourist Board, celebrated the label’s 35th anniversary when VP Records’ founders Vincent and his wife Patricia Chin moved their headquarters from Kingston, Jamaica to Jamaica, New York – transforming their operations into the largest Caribbean music company worldwide.

Inside the grounds, VP Records presented A Reggae Music Journey pop-up museum, designed by acclaimed artist Michael Thompson. The exhibit chronicles the label’s epic journey and their mark on each era of Caribbean music – from rocksteady, ska, reggae, dancehall, soca and more. The label’s co-founder Patricia Chin and family were on site to sign autographs and talk to fans about their legacy in music.

The SummerStage event also followed a very special occasion for Patricia Chin (the P in VP Records). On June 25th, Miss Pat (as her staff affectionately refers to her) received the Lifetime Achievement Award at the fourth annual American Association of Independent Music (A2IM) Libera Awards. Ms. Chin,  who started the business with her late husband Vincent Chin, delivered a heartfelt speech about her 60-year journey of triumph and struggle in the reggae business. She brought the room to a standing ovation, which was filled with music insiders and executives.

Billboard, who recapped the event, raves “Chin had many wise words for upcoming independent businesses, including ‘surrounding yourself with dedicated and passionate people,’ ‘love what you do and do what you love’ as well as embracing change and sharing in success.”

Ms. Chin is the first female to receive this highly-coveted award.

In addition to this honor, that same week Miss Pat was recognized as one of the Outstanding 50 Asian Americans in Business 2015-14. She also recently returned from Cuba, where she discussed her role as a woman in the reggae industry at a Bob Marley symposium.