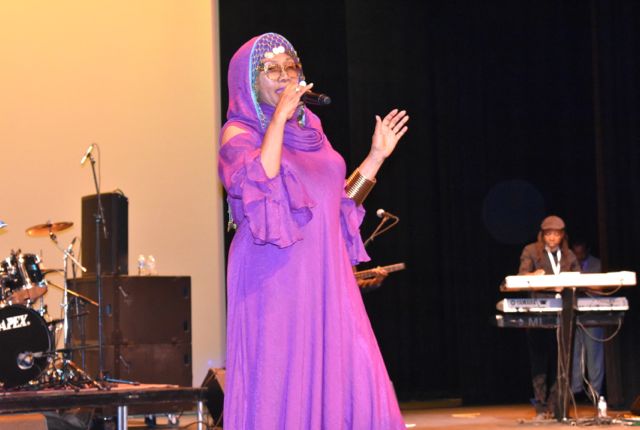 It was a sold out show at the Lauderhill Performing Arts Center (“LPAC”), and internationally acclaimed and legendary reggae singers Freddie McGregor and Marcia Griffiths certainly did not disappoint.  Rather,  the packed audience, most of whom were standing at the front of their seats throughout the show,  swayed back and forth to the string of chart-topping hits that were generously dished out by these two musical juggernauts and grammy nominated artists. 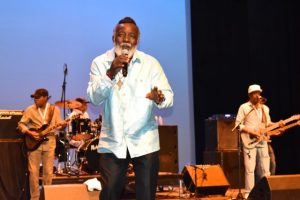 Referred to as the Queen of Reggae, Marcia Griffiths kicked the evening off in fine style in donning a long purple gown with a hood and gold rimmed glasses.  As her voice was heard, the crowd roared and for good reason.  With her career now stretching into its fourth decade, Marcia Griffiths famously toured the globe as a member of Bob Marley’s iconic I-Three background harmony group– along with co-members, Rita Marley and Judy Mowatt.  Going further, the Most Honorable Marcia Griffiths was also the one who masterminded and sang the Billboard smash hit in the 1980’s, ‘Electric Boogie’–complemented, of course, by the smooth and rhythmic ‘Electric Slide’ dance move that seemingly took the world by storm.

Still going strong as evidenced by her unmistakable voice and unbelievable vocal range, the Queen of Reggae was quite unselfish in that she dished out at LPAC number of her timeless songs from her deep vault of hits, including ‘I Shall Sing’, ‘Live On’, ‘Fire Burning’, ‘Truly’, ‘Half Idiot’, and ‘Stepping Out in Babylon’.  As it happened, the anticipation was building up after each song performed by Marcia Griffiths because everyone knew what was coming at some point in her performance.  That is, when the Queen of Reggae closed her set by inviting as many members of the audience that could squeeze on to the stage in order to dance the ‘Electric Slide’ as Marcia sang the song–‘Electric Boogie’.  Indeed, that was the electric moment of the evening in seeing the crowd on stage as well as in the audience go into a frenzy! 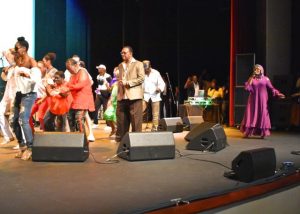 Following the Most Honorable Marcia Griffiths was yet another singing legend in his own right, Freddie McGregor.  With natural talent and enviable vocal ability and a career also spanning over 40 years, Mr. McGregor came out swinging as they say in dropping hit after hit, including ‘Just Don’t Want to Be Lonely’, ‘To be Poor is a Crime’, ‘Big Ship’, and ‘I was Born a Winner’.

Presented by the City of Lauderhill in South Florida, the spacious LPAC venue was befitting and went over well with the show patrons who were afforded seating comfort in an auditorium style arena with good visibility of the stage action throughout.  Surely, it was good to see these two legendary slices of reggae music out and about and still doing their thing at very high level of quality.