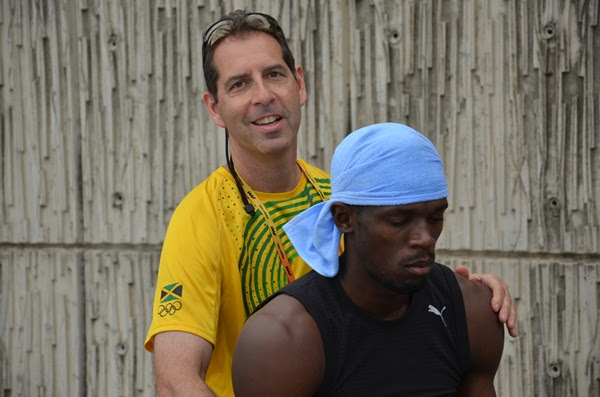 “Every time I travel with the team, I have the privilege of working with some of the greatest doctors on the planet,” says Dr. Douglas who is excited to once again work with world class athletes. “Elite sports medicine is an extreme sport. It takes much discipline, sacrifice, knowledge and experience to bring it all together.”

This summer, Dr. Douglas will begin his World Champion adventure at Tottori, Japan, where athletes are fine-tuning their craft and bodies at pre-camp. Dr. Douglas will assess and treat athletes for any injuries they may have sustained and work closely with athletes to improve performance.

“Every athlete has an injury; some mild, some severe. What we’ve seen mostly are tight muscles, shin splints, hamstring pain and foot issues. However, upper respiratory infection is surprisingly the most common problem,” explains Dr. Douglas.

How does Dr. Douglas get himself in tip-top professional shape in order to offer cutting-edge expertise to the Jamaican athletes? He works closely with leading professionals in the sports medicine and accident care at Douglas Rapid Rehab in Miramar and Lauderhill, Florida. “On every trip I learn new and innovative methods for diagnosing and treating bodily injuries,” says Douglas. “Keeping athletes in tip-top shape is my job. For instance, these athletes are from the tropical climate; I know they need stay warm to perform their best. Choosing the right tent to work under makes a big difference. Even something as simple as wearing new sneakers can injure their feet and possibly put them out of the game.”

Track and Field enthusiasts will now be able to follow along, seeing behind the scene footage and commentary via www.douglaschiropractic.com and on Twitter, Facebook, Instagram at Douglas Chiro, Douglas Chiropractic and Dr. Michael Douglas.