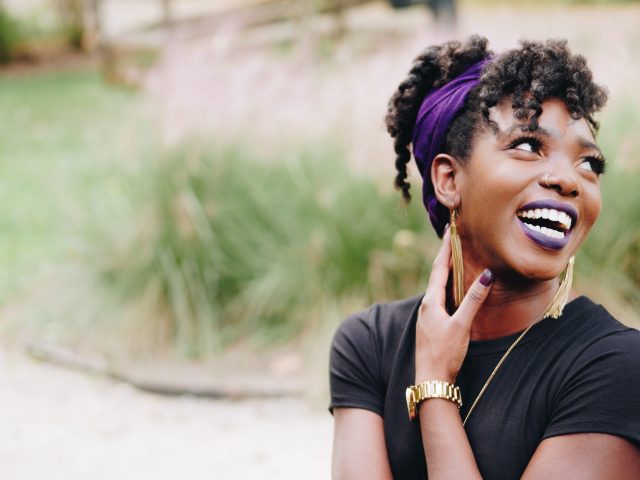 A warm body to snuggle against, silky-straight hair – winter was going great until my #1 Cuffing Season draft pick asked me to be “more natural.” What’s more natural than rocking your hair as it grows from your scalp?

“Be more natural.” Humph, I would have traded him mid-season, but finding a new lover in the middle of winter sucks. This relationship had the potential to survive a Hot Girl Summer.

Yes, his “be more natural” idea was like drinking tap water tea ‘cause it’s more natural. That’s a misinformed health kick. But his booty tho –

SPLUNK. I slid my entire body into the bathwater. I felt like Janet Jackson in her ‘Every Time’ music video. I didn’t know anything about hair types, but I knew my naps looked good.

Nubian queen? Who dat? I slept like an all-natural Caucasian countess: No hair products, no twists or braids, and no head wraps or bonnets.

After so many years, I finally discovered my true texture: I’m a combination of type B and C hair – B for brick and C for cement.

Wearing a hat or a scarf was impossible because my afro was a concrete cloud. It was stiffer than a granny’s knees after flying with Spirit Airlines. Stiff like a freshly pressed linen shirt with a triple layer of spray starch. If my hair was any stiffer, it would be a three-month expired corpse at the bottom of a frozen lake.

I needed to restart the process by wetting my entire head, but I did not have time. I had to run errands pretending that my ‘natural urban bush babe’ look was intentional.

It’s unnatural to be natural. Do you eat a salad without dressing? Using body and hair products is like adding oil to a salad – it’s still natural.

For some blacks, using veggies and salad dressing ingredients is the secret to a bomb twist-out. Don’t sleep on yoghurt, avocados, mayo, or apple cider vinegar.

My hair became one big dreadlock after my night as a Caucasian countess. Life Pro Tip: Dreading the LOC method is the method to dread the locs.

There was nothing to do but go outside and face the world. To my horror, the menfolk went crazy. I couldn’t believe how much they dug my au natural look. Most likely they assumed my raggedy appearance meant I’d go with just anyone. But don’t trip, I accept all compliments. I was catcalled so much that day that I became fluent in Meow.

“You look beautiful.” His words were sincere and heartfelt, so I forgave his ignorance. Then I made him stay up six hours while I washed, detangled, and styled my hair.

Shout out to wide-tooth combs and organic coconut oil. You’ll always be my hair MVP.

Photo by Eye for Ebony on Unsplash