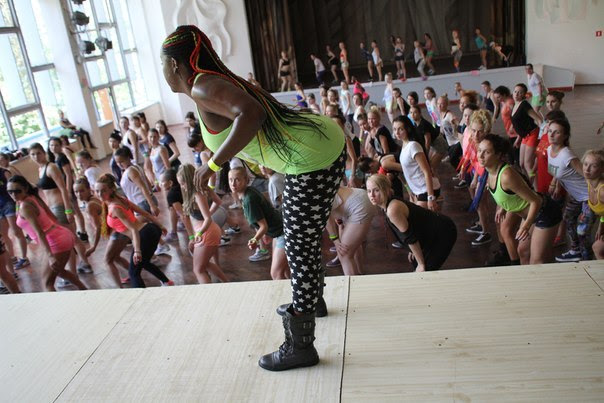 A few weeks ago, a social media tirade begun between two female dancers and popular Dance group, Dance Xpressionz, over a stolen dance move. The Dance move in question is the ‘Shelly Bounce’ created in October 2013 by a premier member of Dance Xpressionz, Shelly-Ann Callum.

“We were just running some routines before we headed overseas for our dance workshops, Shelly started doing a new step and we all loved it. I jokingly called it the ‘Shelly Bounce’ and it stuck so we incorporated it into our routine and have been using it for almost two years” Director of Dance Xpressionz Orville Hall explained.

Earlier this year, while Dance Xpressionz was organizing a routine for Dancehall artiste Savage for his single ‘Bruk Back’, they invited the two female dancers to be a part of the promotion. They taught the routine to them but later decided not to use that particular dance for the Savage promotion.

In July, the group got word and saw visuals of the two female dancers performing the ‘Shelly Bounce’ and calling it ‘Bruk Back’ and promoting it to a single with the same name from Dancehall artiste Razor B.

Shelly immediately reached out to the female dancers to express her disappointment.

“I called the dancers and said you guys came to the studio, learn the dance and tek it and call it sumpn else, I’m disappointed. After speaking to them thee video wasn’t taken down or altered in terms of giving credit to us the dance creators” Shelly detailed.

Dancehall artiste Razor B has also given his endorsement to the dance not knowing that it wasn’t the creative property of the two female dancers but that of Dance Xpressionz.

Dance Xpressionz wants everyone to know the origins of the dance and the two female dancers to be aware that the world knows that they have been deceitful.

“The Shelly Bounce is a dance created by me from Jamaica and has gone as far as Russia and Europe. As dancers this is our daily living; how you treat yourself and your coworkers is exactly how you will be treated” Shelly added.

Dance Xpressionz is focusing on their third Semester of Xpressive Moves Dance classes in early October at their Milbrook Plaza studios in Kingston.

For the final semester for this year, the team will be introducing Piloxing as a new class in the program. This now takes classes to five weekly when added to Soca, Afro, Latin/aerobics and dancehall from the previous semesters.