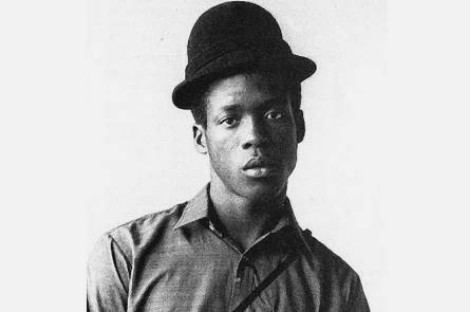 On December 2, 1966, Clive Bright, better known as Tenor Saw, reggae and dancehall singer and songwriter, was born at Victoria Jubilee Hospital in Kingston, Jamaica. Saw gained popularity in the 1980s and was considered one of the most influential singers of the early digital age.

Bright grew up in a family of six children – he was the fourth – in the Payne Land, Maverley and Olympic Gardens areas of West Kingston. His family then moved to Duhaney Park. Raised in a religious household, Bright began singing in the Seventh-Day Adventist Church of God choir in Olympic Gardens.

When he decided to pursue a recording career, he was given his first opportunity to record by George Phang after being turned down by a number of producers in Kingston. His single “Roll Call” was recorded in 1984 on the Powerhouse label on the “Queen Majesty” rhythm. He then went to work with Sugar Minott’s Youth Promotion sound system and Black Roots label, along with his friend Nitty Gritty. His songs “Lots of Sign,” “Pumpkin Belly,: “Run Come Call Me,” and “Fever” were popular in Jamaica. The singer’s most successful single was “Ring the Alarm,” which was voiced over the “Stalag” riddim for the Techniques label of Winston Riley.

Following the success of this single, Tenor Saw went on to work with King Jammy on the recording of “Pumpkin Belly” on Jammy’s “Sleng Teng” rhythm. Saw’s other hits included “Golden Hen” in 1986 on the Uptempo label, and his debut album, which was issued by Minott, called “Fever.”

As with most of the dancehall albums of the time, most of the rhythms were adapted digitally from songs of the 1960s and 1970s. These were usually produced by Coxsone Dodd or Duke Reid, and so “Shirley Jones” is based on the “Rougher Yet” riddim. “Eleni Meleni Mini Mo” used the “Real Rock” riddim from Studio One, and “Roll Call” used “The Techniques “Queen Majesty” from Duke Reid.

When these albums were released, Tenor Saw had already moved to Miami, Florida, and joined the Skengdon crew, recording “Dancehall Feeling” and “Bad Boys.” He also recorded “No Work on a Sunday” for Donovan Germain. Saw then moved to New York and recorded with Freddie McGregor. His last recording “Chill Out Chill Out,” was a duet with General Doggie.

Saw was killed in August of 1988 in Houston, Texas, at the age of 21, in what was officially designated a hit-and-run accident. Other sources believed that it was no accident and that he was murdered, however.

Tenor Saw was extremely influential during the early digital age of recording. His friends included Nitty Gritty and King Kong, both of whom recorded tributes to Saw in 1989. The song “Nuff ma a Dead” by Super Cat is about Saw’s death and the deaths of other contemporary superstars.