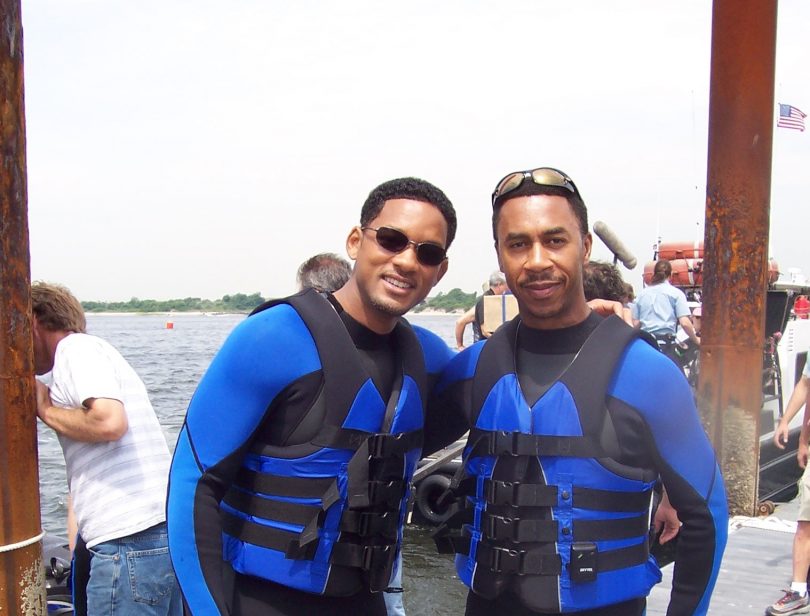 The stunt was the result of seven months of careful planning and preparation. Toronto city officials gave Anderson their blessing only after he agreed to post a $3-million bond. As Roy jumped, below him was a 12-foot high cushion of empty cardboard boxes just in case he missed. On a cold day with swirling winds and temperatures of -3C degrees, Roy kneeled down for a moment of silence, then took three small steps and sixteen strides down a specially built 107-foot ramp, and jumped into “oblivion.” “I pulled a hamstring in mid-flight,” Anderson recalls, “but something just took over and carried me the rest of the way.” After landing, and with his nervous mother and 100 newsmen and friends watching from below, Roy yelled out triumphantly “it’s a new world record.”

The jump bettered the old mark by nine feet, set by two Hollywood stuntmen in 1978. The Olympic long jump record is 29-feet, 2.5 inches. Anderson dedicated the jump to the late stuntman Dar Robinson, who once made a world record fall from the top of Toronto’s C.N. Tower. Robinson died in a 1986 motorcycle accident while filming a movie.

Pictures of Roy’s jump appeared in the National Enquirer, and major dailies in such countries as Canada, United Kingdom, Germany, The Middle East, Japan, Australia, United States, and Jamaica. In 1991 Anderson’s stunt was featured on the American television series STUNTMASTERS, a weekly show that highlighted the danger filled world of stunt people.

About Roy T. Anderson
Roy T. Anderson is a veteran movie and television stuntman/stunt coordinator. He is a two-time world record holder and a 2001 Taurus World Stunt Award nominee for his impressive car work in Shaft. He has doubled for such Hollywood stars as Will Smith, Denzel Washington, Jamie Foxx, and Morgan Freeman. Anderson is also writer, director, and producer of two award-winning documentaries on the Jamaican Maroons, Akwantu: the Journey (2012), and Queen Nanny: Legendary Maroon Chieftainess (2015). Born in Jamaica, Roy immigrated with his family to Toronto, Canada in the early 70s. He enjoyed a stellar athletic career in high school and university. He graduated in 1988 with a Bachelor of Arts Degree from York University in Toronto. Anderson now resides with his wife in New Jersey. Roy performed his first movie stunt in the 1982 cult classic “Class of 84,’ starring a pre “Family Ties” Michael J. Fox. After completing his studies, Anderson set out to pursue stunt work full-time. Since then, the 182-pound, six-footer has become a fixture in the North American movie and television stunt scene, racking up more than 400 production credits in the process, working on such hits as; Men in Black 3, The Dark Knight Rises, Spiderman 2, Bourne Ultimatum, American Gangster, Wolf of Wall Street; and top rated TV series Blue Bloods, Person of Interest, Elementary, and Gotham. While continuing his stunt work, Anderson has again flipped the script to direct his third project; a feature-length docu-film on the life of famed Black Nationalist leader Marcus Garvey, which he’s producing alongside Emmy-Award winning actor Keith David who also serves as the film’s narrator.