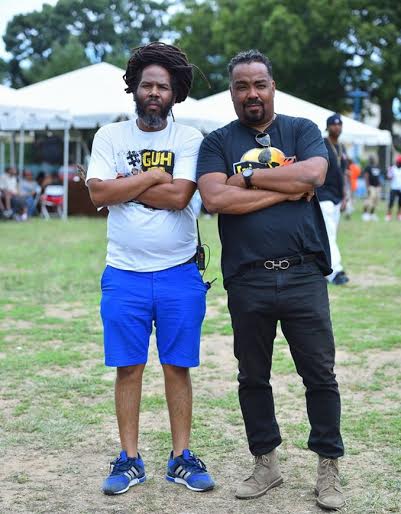 It was a musically spectacular summer day in July when thousands of people from around the world descended upon Roy Wilkins Park in Queens, New York for the inaugural “Sound System Vibez in the Park.” Produced by promotions gurus Irish and Chin, in conjunction, with Irie Jam Radio, the first ever outdoor sound event of such capacity highlighted sound system culture with exciting performances from a massive line-up of some of the industry’s most visible and successful selectors and sounds, including Stone Love, Renaissance, Metromedia, Mighty Crown, Banky Hype, Massive B, Fire Links, Tony Matterhorn, Nexxt Level, Kingston 12 with Shinehead and DJ Papalotl, Soul Supreme, King Addies and Road International. Entertainment reached an all-time high, as the fiery sounds delivered unforgettably energetic performances, which still have the masses raving. In every sense, the first-ever “Sound Fest Vibez in the Park” was deemed an all around success. Sound system culture, the root of Jamaican music, Hip Hop and other music genre, truly got it’s just due.

The family friendly sound system festival attracted fans of all ages, who thoroughly enjoyed their day in the park in the midst of an event chock-full of music and culture. Whether a general music lover, sound aficionado or Reggae Dancehall fanatic, the stellar performances left a lasting impression on the audience, sparking quite a flurry of social media activity. The event’s various hashtags generated thousands of posts with the bulk consisting of riveting video clips and captivating photos. Whether it was customized dub plates or hard hitting 45s, the talented sounds on the diverse line-up commanded the festival stage, causing the crowd to roar with adulation. There was certainly no shortage of forwards (huge crowd responses) at the sound festival, which was technically not a sound clash (DJ competition). However, given that most of the billed selectors and sounds have sound clash in their DNA, it wasn’t a surprise that the event boasted a competitive spirit. Since the compelling festival, the dubs have been a top request from fans.

“This year’s ‘Sound Fest Vibez in the Park’  sparked a huge celebration among the lovers and supporters of sound system culture, further, the event showed that sound culture can still entertain people of all ages when presented creatively,” says promoter Garfield “Chin” Bourne of Irish and Chin. “Our aim was to present the key players of the sound system culture in the manner of which most promoters display artists. I believe we achieved this, as the event allowed patrons to see the sounds in a prestigious light.”

Deemed as masters of their craft, all of the sounds were in fine form, offering fans a bevy of Reggae and Dancehall music selections, which easily channeled 5 decades. The sounds were stars at the festival, captivating the crowd’s attention from start to finish, so much so that their names are still resonating — days after the epic event. While all the performances won the hearts of fans, there were surely some moments from the event, which are etched in everyone’s minds. In addition to the killer customs, one can’t forget when Brooklyn generals Soul Supreme paid tribute to the legendary Shinehead during their crowd-pleasing set. A pillar of the culture, the uber-talented Shinehead was honored to join the sound on stage and proceeded to wow the crowd with his hit “Strive.” Recognized as a commercially successful artist, Shinehead is a singer, deejay and sound man, who has upheld Reggae, Dancehall and Hip Hop for many years.

And no matter how many times Metromedia’s lead selector Sky Juice removes his shirt, it’s always like seeing this for the first time. The audience, especially the kids, got a kick out of his set, which infused music, dancing and comedy. The “vibez” peaked during Fire Links performance, which was near the end of the show. The feisty selector’s set oozed hardcore juggling as he called out fellow sound men, while infectious Dancehall tunes flowed from the colossal speakers. Jazzy T of Renaissance, Mighty Crown and King Addies, among others, also had the crowd buzzing. With sound culture getting a round-the-clock platform on Irish and Chin’s Sound Chat Radio station (http://www.irishandchin.com), the “vibez” continued on air for days after the event.

Not even a short period of rain could impact the “Vibez in the Park” on Sunday, July 11. The audience handled the hint of inclement weather in stride and the show continued in full force. The sun beamed down on the crowd even stronger after the rain. It was certainly a pleasure to see members of the sound system fraternity in the crowd. Various Reggae and Dancehall artists, Caribbean entertainers and local politicians were spotted in the audience as well. Media outlets were also on board to cover the event, which had New York in a frenzy since April.  The Irish and Chin and Irie Jam promotions teams are already carving out plans for next year’s “Sound Fest.” Up next for Irish and Chin is Mighty Crown’ epic 25th Anniversary concert in Japan with Beenie Man and World Clash on Saturday, October 8 in Queens, New York.