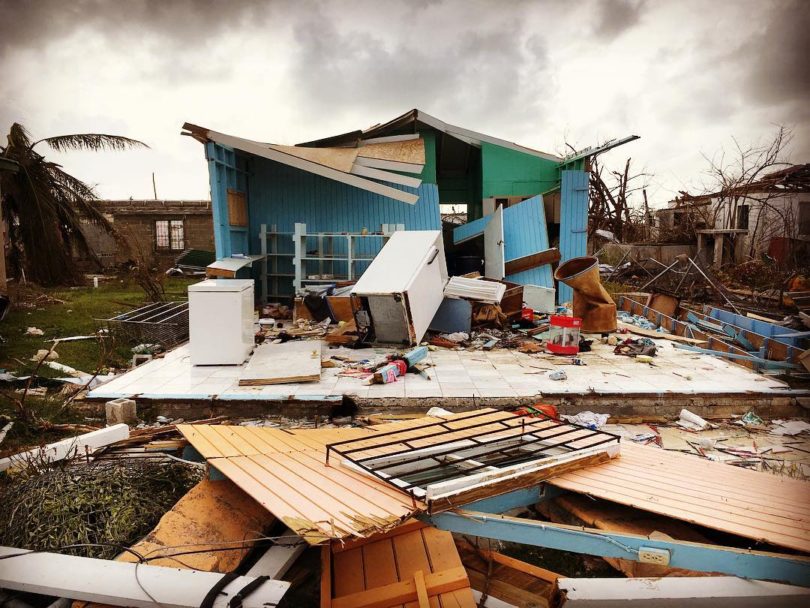 The major news for the Caribbean region in 2017 involved the strong hurricanes that left many nations devastated and struggling to recover. Also in the news were reactions of Caribbean countries to changes in United States immigration laws, and actions to protect sensitive environments. Bermuda got a new Premier, a Dominican author received a Caribbean literature prize,  Barbados honored Rihanna, and St. Vincent objected to unfavorable characterization.

HURRICANE IRMA DEVASTATES CARIBBEAN
Hurricane Irma, one of the strongest Atlantic storms in history, churned its way through the Caribbean region, leaving a trail of death and destruction as it passed. The Leeward Islands were especially hard hit, with at least three people dead and millions of dollars in property damage. Also devastated were St. Thomas and Puerto Rico, which felt the impact of the storm’s strong winds. Hurricane Irma hit Antigua and Barbuda with winds of 185 miles per hour as it began its route through the Caribbean. The eye of the storm passed directly over Tortola as it moved through on its way toward Florida, creating many emergency needs for the populations in the affected areas.

CARIBBEAN SEES DEATH AND DESTRUCTION FROM HURRICANE MARIA
At least 15 deaths on the island of Dominica were attributed to Hurricane Maria, which left many homes completely destroyed. The nation’s Prime Minister Roosevelt Skerrit noted that it was a miracle that hundreds of deaths did not occur as the Category 3 storm and its 120 mph winds passed over the island and moved in the direction of Turks and Caicos and Puerto Rico where it continued to cause catastrophic damage. Much of Puerto Rico remains without power and essential services months after the hurricane passed..

HAITI, STILL REELING FROM PREVIOUS STORM, WANTS DECLARATION OF EMERGENCY
The senate in Haiti  requested that the executive branch of government declare a state of emergency in regard to country’s southern regions, which are still trying to recover from the effects of Hurricane Matthew in 2016 and the more recent torrential rains in the area. The senators turned in a unanimous vote in favor of a resolution calling for the executive to issue a state of emergency for the Departments of the South, Southeast, Nippes and Grand’Anse. They also called for a declaration of a state of environmental emergency for the whole national territory. A state of emergency declaration allows for easier disbursement of funds for aid.

POLICE IN PUERTO RICO WILL NOT ENFORCE U.S. IMMIGRATION LAWS
The chief of the San Juan, Puerto Rico, police department, Juan Gonzalez, made it clear that his department would not enforce the strict immigration rules implemented by the Republican Administration in the United States. According to Gonzalez, the police would not stop people and deport them because it was not their job to do so.  He said, “We are not doing it, and we are not going to do it.” He went on to say that until he is officially notified by the government, his police would not act as immigration officers.

CONTROVERSIAL IMMIGRATION LAW PASSED IN BERMUDA
The Parliament in Bermuda approved a controversial immigration bill designed to “protect Bermuda for Bermudians.” The new regime gave the nation’s Immigration and Protection Act priority over Bermuda’s Human Rights Act. According to Walton Brown, Minister of Home Affairs, the law keeps Bermuda for Bermudians, but the Opposition One Bermuda Alliance, which was defeated in a general election in July 2017, was concerned about the lack of consultation associated with the law’s enactment. The Human Rights Commission argued that the law shows recklessness in its undermining of the Human Rights Act.

TRUMP’S PLANS TO SEND HAITIANS HOME ANGERS BLACK CARIBBEAN LAWMAKERS
The Trump Administration in the United States decided to terminate Temporary Protected Status (TPS) for approximately 60,000 undocumented Haitian nationals who entered the US following the devastating earthquake in 2010. A delay of 18 months was associated with the termination and was implemented to allow for “an orderly transition.” Black Caribbean lawmakers and Black Democratic members of the US Congress expressed outrage at the decision.

CARIBBEAN REGION PROGRESSES WITH MARINE PROTECTED AREAS
Authorities in the Caribbean noted the progress made by nations in the region to protect the marine areas that are critical in sustaining tourism. The initiatives included a new “sister sanctuary agreement” between the National Oceanic and Atmospheric Administration and the Netherlands in April 2017 under the Specially Protected Areas and Wildlife (SPAW) Protocol. The agreement expanded the network of protected areas from New England in the United States to the Caribbean Sea and provided important safe zones to shelter the endangered humpback whale. Haiti’s government declared new marine protected areas in the Grande Anse Department of Haiti..

BERMUDA SWEARS IN NEW PREMIER
David Burt was sworn in as Bermuda’s new Premier on July 19, 2017, after his Progressive Labor Party (PLP) won the election on the previous day. Voters put the party into office with a clear victory and mandate to govern, with 59 percent voting against the previous ruling party, One Bermuda Alliance. Burt, 38, is the youngest Premier to serve in the history of Bermuda. He has a background in technology and is viewed as having a good understanding of “the business of the future.” In a press statement, the PLP stated that the people of Bermuda had chosen a party that knows “international investment is key to economic prosperity.” On winning, Burt said that his government is “ready and willing” to work with everyone who supports putting Bermudians first.

AUTHOR FROM DOMINICAN REPUBLIC WINS CARIBBEAN LITERATURE PRIZE
Rita Indiana Hernandez of the Dominican Republic received the Grand Prix Littéraire Région Guadeloupe for her novel “La Mucama de Omicunlé (Omicunle’s Room Maid).” The prize was awarded at the 5th Caribbean Writers Congress. Rita Indiana, who was born in Santo Domingo, is also a singer-songwriter whose writings focus on social and ethical issues of the Caribbean region. The Grand Prix Littéraire Région Guadeloupe is awarded to a literary work published in French, English or Spanish during the previous three years by a jury of major writers and literary figures from the Caribbean.

GOVERNMENT IN BARBADOS NAMES ROAD AFTER RIHANNA
Westbury New Road in St. Michael parish in Barbados will be known by a new name meant to honor the international pop star Rihanna (Robyn Rihanna Fenty). A naming ceremony was held to coincide with the country’s 51st anniversary marking its political independence from Britain. The Tourism Ministry noted that the road is growing as a tourist attraction, and the nation wanted to highlight the achievements of the Grammy-award-winning singer, entrepreneur, and philanthropist.

VINCENT UNHAPPY WITH LABEL OF “PRIME MONEY LAUNDERING” SPOT
Several regulatory agencies in St. Vincent strongly objected to the characterization of the country as a “prime money-laundering destination,” as described by Paul Manafort, the former campaign manager for the current US President, who is facing a number of legal charges for his financial and other dealings. A joint statement issued by St Vincent’s National Anti-Money Laundering Committee, the Financial Services Authority, and the Financial Intelligence Unit denounced the characterization and stated that such a label is “uninformed, outdated, erroneous, and inaccurate.”