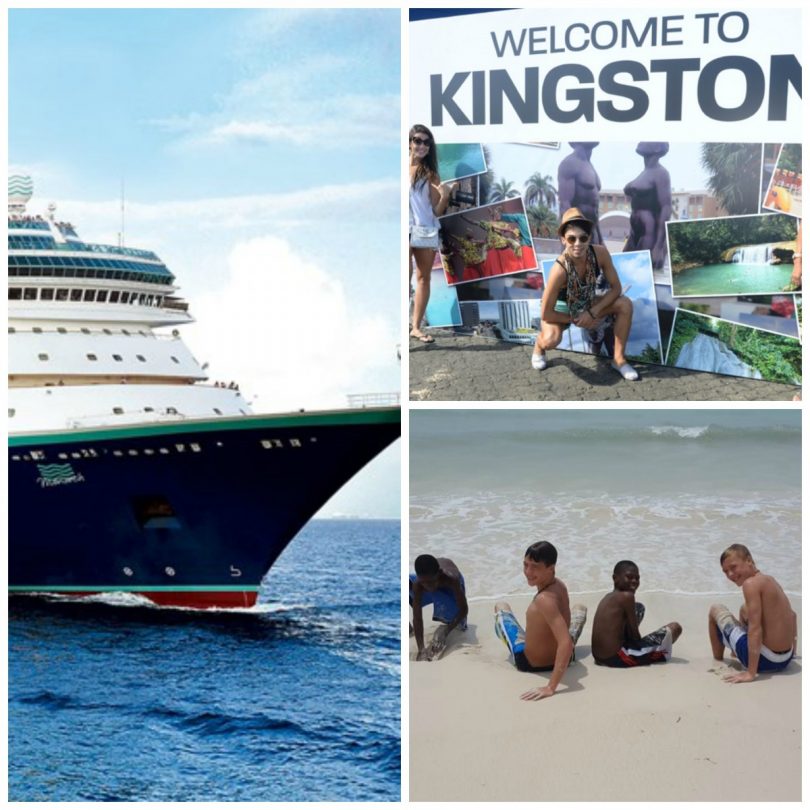 2016 was also an eventful year for the business community in Jamaica. History was made when all of the island’s cruise ship docks were full, and a large vessel had to put in at the Port of Kingston. Burwood Beach in Trelawny reopened after extensive renovations. An advanced air-traffic management system was put into place. Reggae Sumfest got a new owner with a new point of view. The government selected a firm to provide solar power to the island. China invested over $100 billion in Jamaica’s development. The Ministry of Tourism planned for more cannabis tourism. Damien Marley opened a marijuana dispensary in the United States. Jamaica improved its ranking on the Global Competitiveness Index. The launch of a new cigarette company promised a significant increase in employment opportunities on the island.

HISTORY WAS MADE WHEN ALL JAMAICAN CRUISE DOCKS FILLED UP
Royal Caribbean’s “MS Monarch,” a Pullmantur Brand, docked at the Port of Kingston on December 6, 2016, the first cruise ship to dock in Kingston in five years. According to Williams Tatham, vice president of cruise shipping and marine operations at the Port Authority of Jamaica, the ship called on Kingston’s port when it was unable to find a berth on the island’s north coast as all the berths in Montego Bay and Falmouth were full. Tours of historic attractions in and around Kingston, such as Port Royal, Devon House, and the Bob Marley Museum were provided to the ship’s 2,700 passengers. Visits were also scheduled for Spanish Town, St. Catherine, and Dunn’s River Falls in St. Ann. The “MS Monarch” was just one of six ships set to dock in Jamaica on December 6. The “Norwegian Epic” and “Coral Princess” called in Ocho Rios, while the “Thomson Dream” and the “Aida Amar” docked in Montego Bay. In Falmouth, the world’s largest cruise ship, the “Harmony of the Seas,” put into that port for the second time.

TRELAWNY’S BURWOOD BEACH REOPENED
Burwood Beach in Trelawny reopened after years of renovation. Dr. Wykeham McNeill, Jamaican Minister of Tourism and Entertainment, declared the revamped facility at an official ceremony at the beach. The upgrades, which totaled $28 million, included the construction of perimeter fencing, gazebos, sanitary conveniences, a play area for children, and a bandstand. Eventually, the location will include shops, restaurants, and a multipurpose area. There are also plans to purchase adjoining land to expand parking and attractions at the beach. The Trelawny Parish Council is responsible for oversight of beach operations. The redevelopment was funded by the Tourism Enhancement Fund.

ADVANCED AIR TRAFFIC MANAGEMENT SYSTEM PLANNED FOR JAMAICA
The Jamaican Civil Aviation Authority (JCAA) awarded a contract for the implementation of a state-of-the-art air traffic management (ATM) system to Thales. The system will modernize the system and allow enhanced delivery of the air traffic services on the island. Six sites were to be modernized with the Thales ATMs. These sites included the Kingston Air Traffic Control Center, Sangster International Airports, and Norman Manley airport, along with three radar sites. Combined, the new ATMs cover the entire island and its airspace.

BOGDANOVICH PURCHASED THE REGGAE SUMFEST BRAND
The major Jamaican brand, Reggae Sumfest, was purchased by Joe Bogdanovich, the CEO of DownSound Records (DSR). According to Johnny Gourzong, the CEO of Summerfest Productions, he and chairman Robert Russell decided to sell to Bogdanovich because they liked his “new and fresh” ideas, which are designed to revitalize the event. Gourzong also noted Bogdanovich’s significant investments in Jamaica’s music industry. Reggae Sumfest for 2016 introduced in streaming 360-degree virtual reality, a first for the event.

GOVERNMENT CHOSE EIGHT RIVERS TO BUILD SOLAR PLANT
The Jamaican government selected Eight Rivers to construct the 33.1 MW PV solar facility at Paradise Park. The construction started in July 2016. The firm’s selection was announced by the Jamaican Office of Utilities Regulation (OUR). Eight Rivers Energy Company (EREC) built, owns and operates the plant in Westmoreland, bringing a proposed lowest electricity cost of 8.54 US cents per kilowatt hour. The company’s bid was much cheaper than tariffs proposed for the projects. Eight Rivers is an international, independent power producer created by a partnership between Rekamnier Frontier Ventures, based in the United Kingdom, and Neoen, a French renewable energy group. It was chosen from a group of 18 bids received by OUR.

CHINA INVESTED OVER $100 BILLION IN JAMAICA DEVELOPMENT
Jamaica received more support from China for development than from any other nation or funding agency. It was estimated that the People’s Republic of China provided Jamaica with $103 billion in loans and grants for nearly a dozen separate projects on the island. The funds were approved over a period of several years and did not include the costs associated with the North-South Highway. The cost of that project alone was US720 million. China is the second largest economy in the world. Most of the loans to Jamaica were for infrastructure upgrades and development, according to a 2015 Economic and Social Survey Jamaica (ESSJ) from the Planning Institute of Jamaica. The survey found that development aid from China to Jamaica totaled US$880.4 million for 11 projects, while loan financing represents over 90 percent of the amount.

BARTLETT PLANNED FOR CANNABIS TOURISM
Edmund Bartlett, Jamaica’s Minister of Tourism, and its officials created plans for health and wellness tourism that included cannabis attractions. The plans were designed to generate some $5 billion by 2021. According to Bartlett, Jamaica would strive to become a “destination with a difference,” rather than continue to target the general mass tourism model. He created a Health and Wellness Network charged with developing policies for the subsector of the health and wellness market focused on cannabis. A complete roll-out of the plan was expected by the end of 2017. Bartlett sa9d that this approach will make Jamaica attractive to all demographics via product diversification. He noted that the worldwide market for cannabis tourism is valued at approximately $494 billion, and Jamaicans “want a piece of it.”

DAMIEN MARLEY OPENED A MARIJUANA DISPENSARY IN THE UNITED STATES
Damien “Jr Gong” Marley, the youngest son of reggae legend Bob Marley and an international reggae artiste in his own right, opened Stony Hill, a marijuana dispensary in Denver, Colorado. The business was established jointly with Tru Cannabis, a dispensary company, and provided a new retail store featuring a complete line of cannabis-based products that will include edibles, extracts, and various strains of weed. Marley said he was excited about his new project and never thought that he would be opening a dispensary, despite always being an advocate for the legalization of marijuana.

JAMAICA ROSE ON GLOBAL COMPETITIVENESS INDEX
The yearly Global Competitiveness Report for 2016-2017 was issued by the World Bank Economic Forum (Weforum), and it showed that Jamaica rose higher in its ranking among 138 countries from 86 to 75. The higher ranking represented the nation’s second-best in ten years. The index cites crime and theft, inefficient government bureaucracy, corruption, and tax rates as the major factors hindering business investment in Jamaica. The most competitive country in the Caribbean is Barbados, ranking at 72.

THOUSANDS OF JOBS CREATED BY NEW CIGARETTE COMPANY
Nostic Agricultural and Manufacturing Limited, a new Jamaican herbal and nutraceutical firm, planned to employ 17,000 individuals in the next decade in growing and harvesting tobacco. Nostic was the first manufacturing company to come from the GulfRay Special Economic Zone in Spanish Town, St. Catherine. The firm received contracts to export 120 containers of cigarettes to clients in the United States. Panama, the Eastern Caribbean, Canada, Dubai, and Amsterdam. Nostic planned to invest $1.4 billion to cultivate 270 acres of tobacco to fulfill local and foreign demand. The projected as estimated to provide jobs for 5,000 people. The investment was designed for the construction of a factory, greenhouses, equipment purchases, and tractors to begin crop cultivation, research and envelopment.