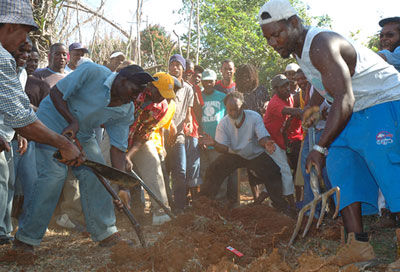 With the Easter holiday fast approaching the Southern Trelawny Environmental Agency (STEA) is deep in the midst of planning the annual Trelawny Yam Festival. With nearly 15,000 people attending the 2005 Festival STEA looks to build last year’s momentum and showcase the best history, culture and excitement that Trelawny has to offer. The 2006 Festival is going “back to the grung” to showcase Trelawny’s main crop and the many by-products and business opportunities that come with it.

Trelawny Yam Festival 2006 is scheduled for Easter Monday, April 17th, 2006. The Festival is spread out over a week of events starting on Friday, April 7th with the Schools Competition. The Schools Competition seeks the best and brightest students in Trelawny to compete in the categories of song, poem and dance on the theme “History, Culture, Folklore and Cuisine of Cockpit Country.” On Tuesday, April 11th the Farmer’s Field Celebration will take place. The Field Celebration will be held in the community of Thompson Town and celebrates the life style, traditions and recreation of farmers of Trelawny who raise the crop that inspired this Festival. Thursday, April 13th is the Yam King and Queen Pageant where the best and brightest of Trelawny’s youth will take the stage to prove themselves worthy as ambassadors of this region and promoters of this staple. The Pageant is held on the lawn of the Ulster Spring Primary School. TYF Sports Day is set for Sunday, April 16th with a 50K Cycle Race from Falmouth and a 10K Road Race from Warsop, both culminating in Albert Town Square. The Sports Day celebrates the agility of the yam farmer but it also serves to charge up the Yam Festival atmosphere throughout Sunday as the event organizers prepare for Grand Trelawny Yam Festival Day on April 17th. The first and best festival in Jamaica is pulling out all the stops in 2006 as it showcases the yam and its endless creative possibilities. Events and activities on Grand Yam Festival Day include the Yam Market, the Yam By-products Exhibit, cultural performances, the Culinary Competition, food vendors, commercial exhibits, music, craft and snack vendors, the Best Dressed Donkey and many other activities for people of all ages to enjoy.

Besides being a patron to the five Yam Festival events there are many ways that Jamaicans from across the island can become a part of this year’s event. The Festival is full of competitions with cash and many other exciting prizes to be won. This year’s competitions include the Schools Competition, Yam Hill Digging Competition, Champion Farmer, the 10K Road Race, the 50K Cycle Race, the Best Dressed Donkey Competition and the delectable Culinary Competition. Information on how to enter these competitions along with other information such as vending opportunities can be obtained by calling STEA at 876-610-0818 or by emailing at [email protected].

Carry home a piece of the finest yam in the world and take in the sights of the amazing Cockpit Country at Jamaica’s original food festival on Easter Monday, April 17th.