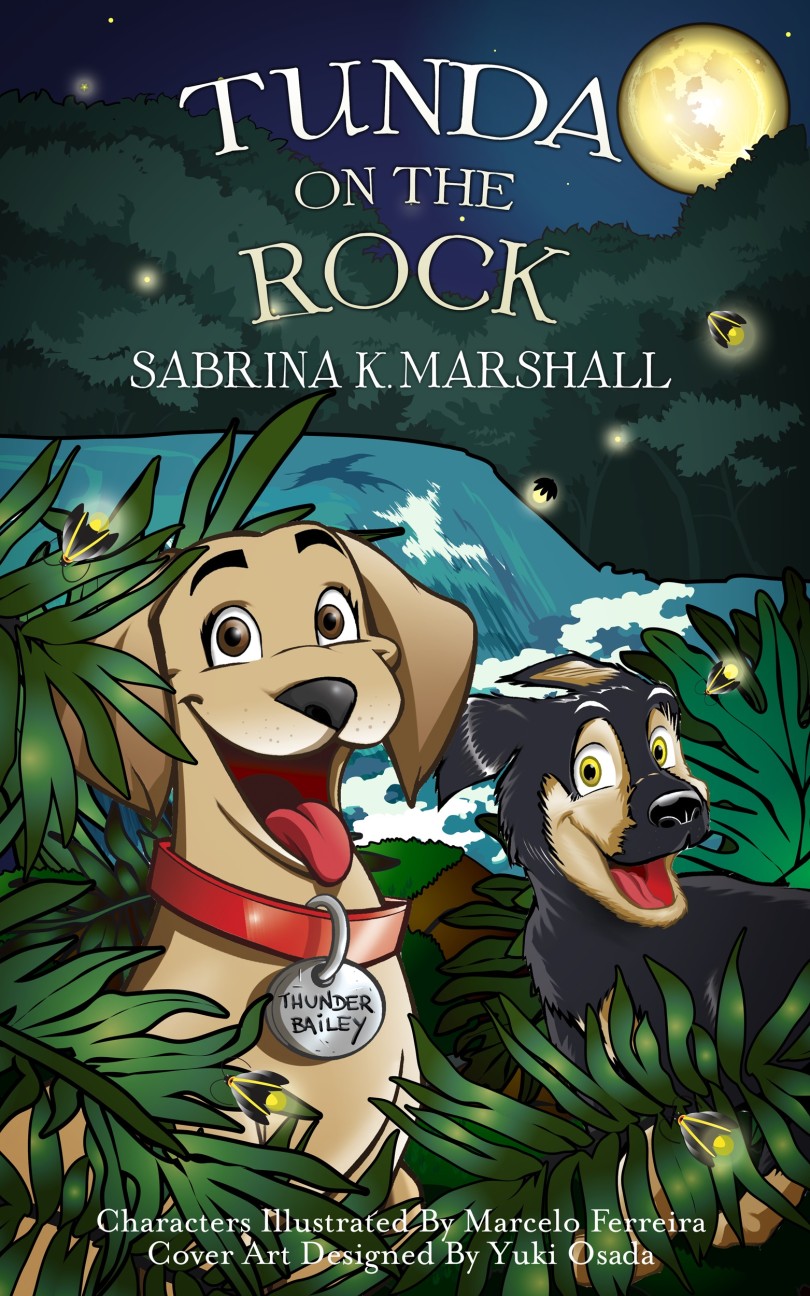 Tunda On The Rock – While the rest of the Bailey pack is out of the yard taking care of important business, the youngest member, who they call Tunda with their Jamaican accents, is ordered to stay home on guard duty where it’s safe. But the courageous, day dreaming, golden-brown puppy has plans of her own.

She makes it her mission to prove her worth by partaking in a risky nighttime adventure on The Rock—the dogs’ name for the area surrounding the Bailey home, consisting of a golf course, cascading waterfalls, and white sandy beaches. Her adventure is filled with new friends—and enemy by association, Rex—along with a rude awakening to the hard dangerous life of stray dogs outside of the luxurious Bailey residence where she’s spent her entire puppyhood.

As Thunder’s adventure takes her farther from home, she learns that her pack is in grave danger, more so than she could’ve ever imagined. With the help of her new friend, Onyx, and the wise Mr. Rasta, Thunder makes every effort possible to save the dogs of The Rock. Will she make it back home? Will she save them?

Reviewed by DL – I just finished reading this adorable children’s book about a day in a life of a courageous young puppy who defies her orders and risks her life to save her family. The story takes place in Jamaica and Thunder Bailey (pronounced “Tunda” as if speaking in a Jamaican accent) is a young female puppy who is the newest member of the pack of the Bailey guard dogs. Their primary job is to protect the home of their master who lives in a beautiful gated mansion, but there is trouble brewing in their territory known as The Rock. The stray dogs have become more bold and have entered The Rock; vandalizing the community in search of food and creating a mess in the Bailey’s neighborhood. This book shows the differences between the lives of the strays and privileged dogs who have a master. The Baileys live in a beautiful home, are fed regularly and are always tended to when they are ill, which is why they have created enemies with the strays that never know when the next time they will eat. The strays have lived a life of always being harassed by humans who want to hurt them. Since they are always hungry, they will tear up a neighborhood in the search of food.

This behavior will not be tolerated and the Bailey pack must defend their land by winning the race, which will send the stray dogs away from The Rock. Thunder wants to be included in this adventure with the rest of her pack but was ordered to stay at home to help protect the house since dealing with the strays is no place for a puppy. She ends up sneaking off in search of her pack and gets into a crazy adventure of her own.

Vacationing in Jamaica a few times, I’ve noticed that there is an abundance of dogs. The magnificent gated houses around the golf courses in the tourist areas always have at least 3 guard dogs. I remember seeing a home that had 8! They really do their job and will bark like crazy if you are just passing by to admire the the beauty of the neighborhood. I also remember seeing a lot of stray dogs just wandering around, which appeared to be normal to the locals. It seems like it’s just part of the Jamaican culture.

This book did a great job in describing the area. It made me feel like I was back in Jamaica; from reading about the moonlit beach to the prestine golf course, I could really picture what the author was trying to portray. I also like how the characters in the book speak with a Jamaican accent. It really made me reminisce about my visit there.

This book did a great job in giving the reader a taste of the culture of Jamaica that I didn’t know, but through the eyes of a puppy. It taught me what is considered a good meal for dogs (chicken back and rice) to what it means to be a member of a pack (whatever the alpha says, goes).

Tunda on The Rock is a cute book that gives you a glimpse of a dogs life with a taste of jamaican culture. It’s a quick read with funny characters that go through outrageous adventures in a single night that will be sure to make you smile. It is highly recommended!!

Reviewed by Raj Springer – I thought this was an excellent book despite the slow start but really picked up when the adventure began for the horse shoe. The book tells a wonderful story and has hidden life lessons hidden amongst for kids. If you are very fond of dogs, love animals and want that nostalgic feeling with a sweet ending that leaves you wanting more, then this is definitely a read for your time. Great read and overall, I loved the story; it was so interesting and fun I would totally recommend this to anyone. Sort of makes me want to go to Jamaica and get some of that good Jerk Chicken. Tunda on The Rock is the first novel by Jamaican author Sabrina K. Marshall.

She was the creator, writer, and producer for the hit show, Kingston House, which premiered nationwide on Television Jamaica in February, 2012.

When she’s not writing children’s books or teen dramas, she works with an advertising agency in New York City, holding over 10 years of experience developing ad campaigns for Fortune 500 companies. From Temple University, she has a Bachelor’s of Business Administration degree with a concentration in Marketing, from the University of London she has a Master’s of Arts degree in TV and Film Production, and she’s currently studying French at New York University. She loves to travel, play tennis, and spend time with her family.

Sabrina is based out of New York, but continues to stay grounded to her Jamaican roots with frequent visits to the island.

Where to Purchase Book

Tunda On The Rock can be purchased on Amazon.com