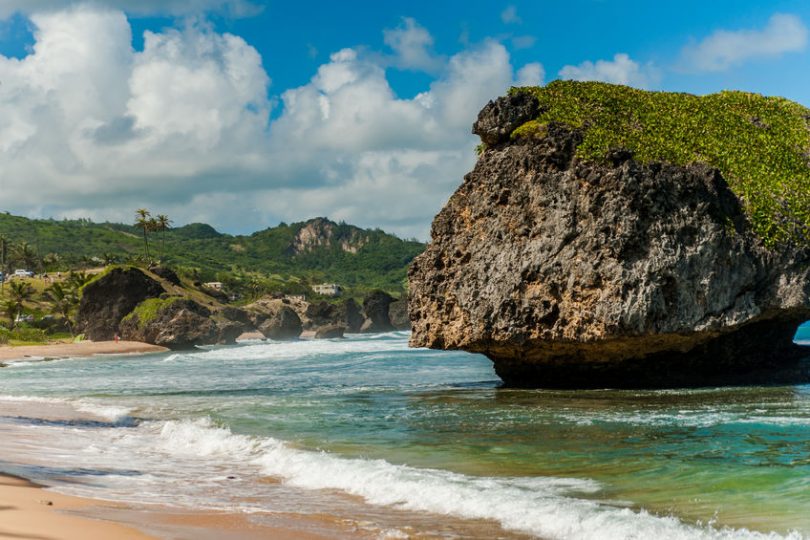 Barbados is one of the Windward Islands, a coral island with white sand beaches fringed with coral reefs It is a sovereign nation located in the Lesser Antilles, in the Caribbean. Amerindian people are believed to have settled in Barbados during the 4th to 7th centuries AD. The Kalinago people have lived on the island since the 13th century. It was claimed by Spain in the late 15th century, appearing on a Spanish map for the first time in 1511. The British took possession of the island in 1627, and it became a British colony. Barbados became independent in 1966. Barbados is home to the Crop Over festival, a large carnival-like event that is celebrated with musical competitions featuring calypso and soca music. The festival celebrates the sugar cane harvest; it begins in July and ends with parades on Kadboment Day, the first Monday in August.

7 THINGS YOU MUST SEE IN BARBADOS 1. Bathsheba Beach
Located on the rugged eastern coast of the island, the white-sand beach stretches along a spectacular coastline comprising unique formations of rock on which waves from the Atlantic Ocean break in foaming cascades. According to legend, the white and foaming surf of Bathsheba Beach are rich in minerals that are similar to those used by King David’s wife Bathsheba in the milk baths she took to keep her skin beautiful. The waters of this beach are said to have numerous health-giving properties. The small fishing village of Bathsheba nearby offers guest houses, rum shops and restaurants. These is also Bathsheba Park, which is perfect for picnicking.

2. Harrison’s Cave
One of the island’s major attractions, this cave is located in its central uplands. A crystalized limestone cavern that features flowing streams and deep pools of clear water, as well as towering columns of stone. White flow stones and speleothems adorn the cave with unique formations.

3. Carlisle Bay
This small natural harbor is in the island’s northeast region. The nation’s capital of Bridgetown is located on the bay, which has been transformed into a marine park. The park is popular with scuba divers. It is possible for divers to find relics like cannonballs and ship’s anchors on the floor of the bay. Carlisle Bay is named for James Hay, Earl of Carlisle, the second Lord Proprietor of Barbados who claimed the island via a royal grant for King Charles I of England in 1627. The historic Needham’s Point Lighthouse is located on the bay. In World War II, the British ship “Cornwallis was torpedoed by a German U-boat here.

4. St. Nicholas Abbey
Located in St. Peter, St. Nicholas is a plantation house, a museum and a rum distillery. It was built in 1658 by Colonel Benjamin Berringer and is one of only three authentic Jacobean mansions in the Western Hemisphere. The Colonel was killed by his neighbor Sir John Yeamans in a duel, and Yeamans then married his widow and claimed the property. St. Nicholas Abbey never had a church connection, but functioned as a sugarcane plantation house until 1947. The house was acquired by baronet, planter and legislator Sir John Gay Alleyne who lived there from 1746 until he died in 1801. He is said to have planted the mahogany trees that lead to Cherry Tree Hill. The abbey has been owned by architect Larry Warren since 2005. It serves as a museum that recreates 18th century plantation life, complete with Wedgewood pottery and Chippendale furniture. It is listed by the Barbados Tourism Authority as one of the “Seven Wonders of Barbados.”

5. Andromeda Gardens
This six-acre botanical garden in Bathsheba displays flowering plants and tropical trees. It includes the Flower Forest and is arguably one of the best parks on the island. It began with a private plant collection at the home of Iris Bannochie, an expert on horticulture who started the garden in 1954 on land owned by her family since 1740. It first opened at a fund-raising event in the 1970s, and was so well-received, it has remained open to the public and had some 40,000 visitors in 1990. A major attraction of the garden is the tailpot palm tree, one of the largest palm trees in the world. The palm garden includes more than 60 species of palm. The attraction also includes a library, classroom, cafeteria and gift shop.

6. Historic Bridgetown and Its Garrison
This UNESCO World Heritage Site is a small district some two miles south of the capital city’s Heroes Square. The area is dominated by the historic race-track located on 30 acres of parade ground known as the Garrison Savannah. The area holds numerous historic buildings, including military barracks. In the 18th and 19th centuries, the Garrison was the headquarters of the British West India Regiment. In 1751, George Washington, future first president of the United States, stayed six weeks with his sick brother in the district’s Bush Hill section. The place where he stayed has been restored and is included at the Garrison where it is known as the “George Washington House.” This historic area was the site of the ceremony marking the independence of Barbados from the United Kingdom on November 30, 1966.

7. Swim with Sea Turtles
Barbados is home to a variety of sea turtles, and visitors can take advantage of eco-adventure tours that allow them to swim with the local turtles in Carlisle Bay. Tours provide all snorkeling equipment, and swimmers can feed turtles and take underwater photos of the locale. A boat takes swimmers out to the turtle-contact area, providing a scenic view of the southern coast of the island. Most of the turtle tours use catamarans that provide lunch as well.
Most turtle tours are on catamarans which provide lunch, masks and snorkels. It’s a great day out – sailing down the beautiful coastline, a delicious lunch, rum punches and other drinks, and of course seeing the magnificent turtles and snorkeling in the Caribbean sea. Some tours include stops at the beach and snorkeling over shipwrecks. 1. Fish cutters
A sandwich in Barbados is called a “cutter,” and these are made using the traditional salt bread of the island, which isn’t at all salty. While cutters can be made with eggs or ham, visitors should try the flying fish variety. The flying fish is the national dish of Barbados, and is actually found on the nation’s coins. Flying fish cutters can be found everywhere on the island and may be prepared with peppers and spicy Bajan hot sauce.

2. Cou Cou
This dish, pronounced “coo coo,” is a staple of households in Barbados. It is made with either cornmeal or breadfruit combined with okra. The dish dates back to the island’s African ancestors and can be difficult to find in restaurants, but when available, it is definitely worth a try.

3. Rum punch
Every visitor must try rum punch, which is so popular on the island that there is a rhyme to help cooks remember the recipe: “One of sour [lime], two of sweet [simple syrup], three of strong [rum], four of weak [water].” Most of the rum punches available in Barbados use the local Mount Gay rum.

4. Conkies
Conkies are a traditional island dish made of corn flour combined with coconut, spices, sugar, pumpkin, and raisins or cherries (optional), all wrapped in a banana leaf and steamed. They were originally made for Guy Fawkes Day, but visitors can find them any time of the year now. Conkies are especially popular during celebrations of Independence Day in Barbados. This sweet and filling snack features authentic tastes of the nation’s culture and history.

5. Pudding and Souse
In this traditional dish, “pudding” refers to a mix of pounded sweet potatoes, onions, salt and pepper, which is stuffed into a (clean) pig’s intestine that is tied off, like a sausage. This is then cooked in boiling water. The “souse” of the dish comprises various pickled parts of the pig (feet, snout, ears). The dish may be served with pickled cucumber on the side.