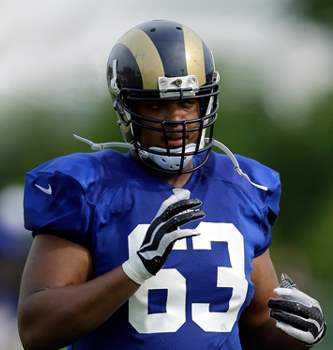 Darrell Williams, who spent his early childhood in Jamaica, was considered a long shot when he entered training camp for the St. Louis Rams. Now he is one of three undrafted rookie players to make the cut for the National Football League team. Williams was on the 53-man list as an offensive tackle. Williams’ journey to the NFL was anything but typical. He didn’t even begin to play football until he was a sophomore in high school. He wasn’t much of a soccer player while at school during his first 13 years growing up in St. Catherine and gravitated toward basketball instead. His family moved to Orlando when he was nearly 14, and the head football coach at Evans High School “pestered” him to switch from basketball to football, noting that he was the “right size” for football. Williams, who now weighs 300 pounds and is 6 feet 5 inches tall, finally agreed to try the sport. During his high school years, he made all-Orange County and all-Central Florida teams, and when at college in South Florida he had 29 starts in 45 games in the left-tackle position. Although he was undrafted, Paul Boudreau, the offensive line coach for the Rams, liked what he saw in Williams and made him part of the team. Williams says it seems like “just yesterday” when he was playing OTAs and offseason workouts. He is now preparing to play the Seattle Seahawks, the two-time defending NFL champion team.