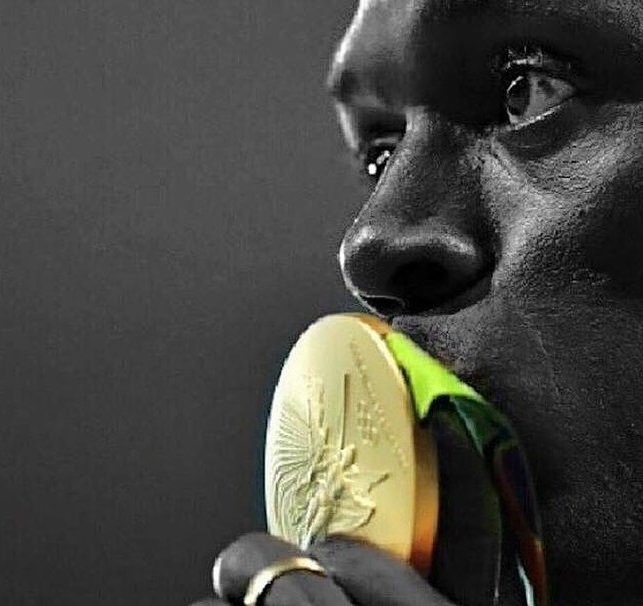 In a partnership with SurveyMonkey, ESPN Undefeated created a list of the greatest 50 black athletes in history by asking 10,350 adults to rank 200 athletes on 20 different surveys to determine those deemed to be the top 50.

Jamaica’s sprint champion Usain Bolt was ranked Number 14 on the list of Top 60 black athletes. Bolt has won 21 Olympic and World Championship medals, the highest total of any track and field athlete to date. Bolt’s time of 9.63 seconds to win the 100-meter gold medal at the 2012 Summer Olympics in London made him the first man in history to set three Olympic records during the same games.

Ranked Number 13 is NBA star Kareem Abdul-Jabbar, who was cited for his 38,387 points scored in his career, the most in NBA history. He is also a long-time civil rights activist, the author of 12 books, a six-time NBA champion, 19-time All-Star, 10-time All-NBA first-team selection and all-time leading scorer in the league. He is the top practitioner of the “skyhook,” one of the greatest shots in basketball history.

Number 12 on the list is occupied by another top basketball star, Magic Johnson. Johnson achieved 138 career triple-doubles, the second-most in NBA history. He is also remembered for his courageous announcement in 1991 that he tested positive for HIV and would retire from the league. He continues to be remembered as one of the top point guards, and overall players in the history of the sport. He was named a Finals MVP three times and NBA MVP three times.

Ranked in 10th place is NFL player Jerry Rice, the only player in the history of the league to attain over 20,000 receiving yards during his career. He has been called the greatest wide receiver of all time and began his career at Mississippi Valley State, a traditionally black university. He was named first-team Division I-AA All-American twice. His 22, 895 career receiving yards is considered an unbreakable record.

Ranked Number 9 is gymnast Gabby Douglas, who received 62,232 all-around gymnastic points at the 2012 Olympic Games. At just 16 years of age, she became the first African American to win a gold medal in both the all-around and team competitions. She made the US Olympic team a second time in 2016 and helped her team to win gold in Rio, in spite of being continually harassed for her hair style, a criticism that began in 2012. In 2016, she unveiled her own Barbie Doll, which features beautiful hair.

At Number 8 is Simone Biles, who has won 19 Olympic and world championship medals, the highest total of any American gymnast in history, She was awarded gold medals in the individual all-around, vault, floor exercise and team events, and a bronze medal for the balance beam, at the 2016 Olympics and ten gold (all-around, floor, balance beam, team), two silver (vault) and two bronze (balance beam, vault) medals at the World Artistic Gymnastics Championships from 2013 to 2015. She was the first African-American all-around winner at the 2013 World Championships.

Ranking Number 7 is major league baseball legend Hank Aaron, who appeared in 25 All-Star Games, the most in the history of the MLB. During the 1974 MLB season, 27 years after Jackie Robinson broke the color barrier in the league, Aaron hit his 715th career home run, beating Babe Ruth’s39-year-long record. The Hall of Famer still holds league records for RBIs (2,297), total bases (6,856) and extra-base hits (1,477),

Ranking Number 6 is tennis superstar Serena Williams, who won 23 Grand Slam individual titles, he most in the 50-year history of the Open era. Since 1995, when she turned professional, Williams has continually displayed athleticism and toughness to establish herself as one of the greatest female athletes of all time.

At Number 5 is Jesse Owens, whose display of speed at the 1935 Big Ten Championships while playing for Ohio State tied the world record for the 100-yard dash, set world records in the long jump, 220-yard dash, and 220-yard low hurdles. At the Berlin Olympics in 1936, competing in front of Germany’s dictator Adolf Hitler who had said that people of color could not match the “Aryan master race” in athletic ability, Owens won gold in both the 100-meter and 200-meter races, the 4×100-meter relay, and the long jump. Confronting racism throughout his life, he traveled 200,000 miles a year after his retirement as a public relations representative.

The Number 4 spot in the ranking is held by Willie Mays, who achieved 7,095 career putouts, the highest number achieved by any outfielder in MLB history, Mays has been called the “greatest-five-tool player” to ever have played the game of baseball. During his 22 years in the MLB, he attained a .302 batting average, 660 home runs, four National League titles for stolen bases, 12 Gold Glove Awards and 24 All-Star appearances from 1959 to 1962, It has been said that the All-Star Game was invented for Mays. In the 1954 World Series, Mays performed the legendary play known as “The Catch” with his trademark basket grab in one of the greatest defensive plays in the history of baseball.

Ranked Number 3 is boxer Muhammad Ali, who experienced a gap of 1,314 days between his 29th and 30th fights due to his refusal to be drafted into the US Army during the Vietnam era. Born Cassius Clay in 1942, he won a gold medal in boxing at the 1960 Olympics in Rome. His outspoken character endeared him to many fans, but also made him many enemies. He defeated the likes of Sonny Liston, Joe Frazier and George Foreman. He was one of the most visible athletes during the 1960s civil rights movement in the US and the black liberation movement in the 1970s. Affliction with Parkinson’s disease hindered his sports career, but he changed the role of athletes in activism for all time.

At Number 2 is Jackie Robinson, winner of the MLB Rookie of the Year award in 1947 with a .297 batting average, 175 hits, 29 stolen bases and 12 home runs. He was the best player in the Negro Leagues and had the temperament to handle the hostility of the baseball industry when he broke the color barrier by playing for the Brooklyn Dodgers. He was the only athlete in UCLA to earn a letter in baseball, basketball, football and track. He was a a six-time All-Star, a two-time stolen base leader and a batting champion. He was the first black vice president of a major American corporation, assuming the title at Chock Full o’Nuts.

And ranked at the top of the list in Number 1 position is Michael Jordan, who scored 63 points during 1986 NBA playoff game, the most in playoff history, He was named to the top spot as a result of his combination of dominance, impact and inspiration during his career. In 15 NBA seasons, he claimed NBA titles in six appearances at the Finals, obtained six Finals MVPs, and after retiring, he continues to impact the sport and the sneaker industry, becoming the only African-American majority owner in major professional sports.