Pursuing his goal of becoming a professional footballer, Jamaican Olympic champion Usain Bolt is training with the Norwegian side Stromsgodset. This follows his trials with Manchester United and Borussia Dortmund. Bolt, an eight-time Olympic gold medal winner, trained with the Norwegian club in Drammen, which is located near Oslo. He is hoping to play in a friendly that is organized by the club’s Under-19 side. According to Bolt, he is trying to improve his performance by working as hard as he can and playing as much as he can. “Maybe a club will see something and decide to give me a chance,” he said. He was given the shirt number 9.58 during his time with the club in reference to his world record-breaking time in the 100 meter, Jostein Flo, sporting director of Stromsgodset, said that Bolt could get a chance to play in a game to show off his skills, adding that the side’s players were surprised to see Bolt, who is known as the world’s fastest man, in their dressing room. 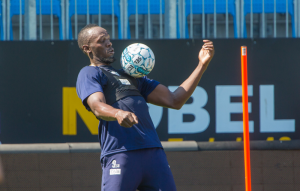 Flo said he told the team that “a player” was coming to try out and that he was “fast,” but when Bolt opened the door and came in, “it was a shock to them, they couldn’t believe it,” according to Flo. Bolt, 31, a big fan of Manchester United, also trained with the Bundesliga club Borussia Dortmund in March 2018 and was a featured player in special editions of Konami’s Pro Evolution Soccer 2018. Bolt retired from track and field competition in 2017 after the World Champions in London after a stellar career in the sport. He has been called the greatest sprinter of all time and is one of the most-recognized athletes in the world. He is the only sprinter to win the Olympic 100-meter and 200-meter titles at three consecutive competitions in 2008, 2012, and 2016. He received worldwide attention at the 2008 Beijing Games with world record times, making him the first person to achieve a double-sprint victory since the implementation of mandatory automatic timekeeping. He won the World Championship 11 times, competing in the 100 meters, 200 meters, and 4×100 meters races from 2009 and 2015. Bolt’s remarkable achievements as a printer earned him the nickname “Lightning Bolt,” His other awards include the IAAF World Athlete of the Year, Track & Field Athlete of the Year, and the Laureus World Sportsman of the Year award four times.