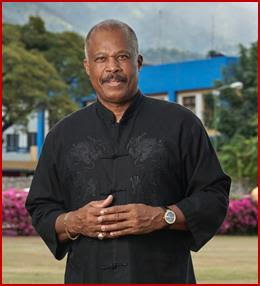 The Legacy Awards are conferred annually on notable individuals or entities which represent high levels of achievement within their respective fields of Industry, enterprise and in service in their communities by AFUWI – the US-based Foundation which partners with the UWI alumni, the Caribbean Community in the United States, American foundations and corporations, to raise funds for projects, scholarships and academic programs on the university’s four campuses.

Referencing “shifts in government policy in some islands with respect to student support”, Sir Hilary said that the university’s administrators had “worked increasingly to develop sustainable strategies to propel the UWI into the future we deserve – the future we have promised to deliver to the nearly 40 million people of the Caribbean.”

“We have spawned linkages between industry and academia, sports and entertainment and culture to deliver innovation and value for the economic growth of the nations”, Sir Hilary expanded.

Among the 2016 recipients of AFUWI Legacy Awards to be presented at the black-tie gala on Wednesday, February 24, 2016, at the Pierre in New York City, is Dr. Harold Freeman, CEO, President & Founder of the Harold P. Freeman Patient Navigation Institute in New York and Professor Emeritus of Surgery at Colombia University.  He will receive the “AFUWI Lifetime Achievement Award”.

Noting that all the recipients are “eminently deserving”, Sir Hilary said that “in its journey of excellence UWI has benefitted from magnificent support from the private and public sectors in the Caribbean and abroad, alumni and faculty.”

“The UWI is a monument built for the people of the Caribbean years ago but its reach has transcended time and space, delivering some of the best minds – scholars, academics, business leaders, presidents and prime ministers and the February 24 gala pays homage to all who have contributed to our progress”, he expanded.

World famous entertainer/activist Danny Glover is this year’s Honorary Gala chair, while former New York City Mayor David Dinkins is Honorary Dinner Chair. Kaye Foster will serve as Dinner Patron with past awardee Paxton Baker serving as Gala Chair.The Gala starts at 6 pm with a reception and auction, followed at 7 pm by the dinner and programme.

Tickets for the fundraising gala start at $500 and should be reserved by Friday, February 12, 2016.  To reserve or purchase tickets, contact AFUWI by calling 212-759-9345.  Proceeds from the gala each year go toward providing scholarships and to the UWI. For information about making a contribution to the Foundation, please visit our website http://www.afuwi.org.