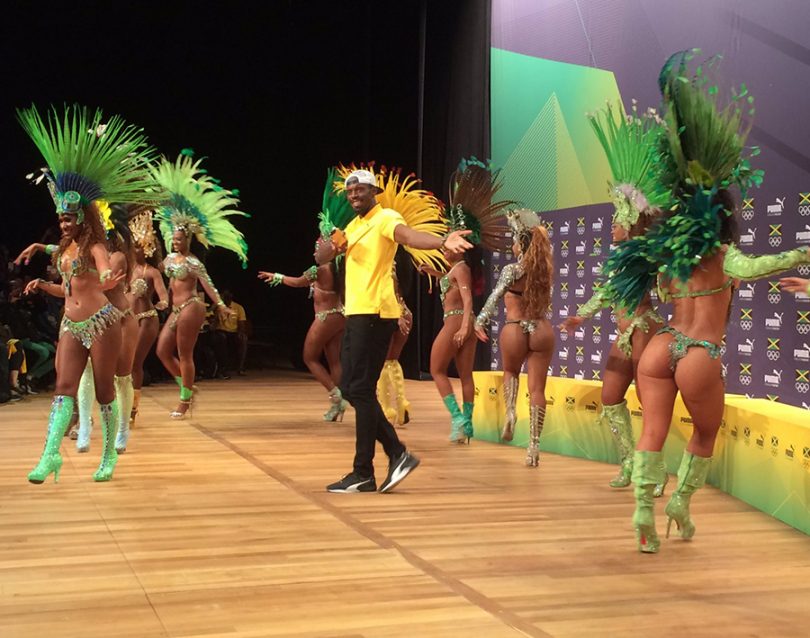 Jamaican sprint superstar Usain Bolt held a press conference ahead of the track and field events at the 2016 Olympic Games in Rio and had a lot of fun doing it. He did answer some questions, confirming that 2016 will be his final Olympic competition and noting that he had proven himself. Then, after he finished the traditional format of a press conference, which was held in what has been described as the largest theater in South America and packed with onlookers, a “reporter” in the press box rapped a message to Bolt, the world’s fastest man. Bolt was very entertained by the “rapping reporter” that he asked him to repeat it so it could be posted on social media. The message was “I hope you win. I hope it’s your day. I hope you will go even though you got hit by a Segway,” Bolt then strutted along with some samba dancers, made a joke about his fellow Jamaican sprinter Asafa Powell, and awarded a journalist a pair of autographed spikes to complete the spectacle.

One more of Usain Bolt doing his thing with samba dancers at conclusion of his press conference in Rio pic.twitter.com/gGM4XhNq7v

“@RickMaese: Usain Bolt walking out of his press conference with a dancing entourage pic.twitter.com/oGKeKeQDOg” cc @Docmusty

What this? Oh, just a Usain Bolt press conference. Nothing to see here. pic.twitter.com/LSQ48wgeUJ

This is how the Usain Bolt press conference ended. That’s him in the middle. Tell me he ain’t winning in #Rio2016. pic.twitter.com/Cac9NjOyaT