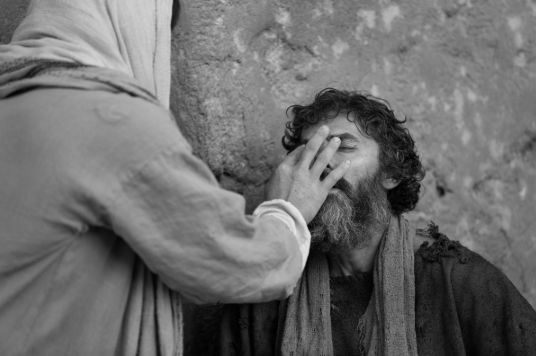 When Jesus healed the blind man He encountered after being thrown out of the temple, He showed him much grace.  According to the narrative (John 9), the man did not even ask to be healed. Truth be known, he did not even know who Jesus was because had He known that the One who was able to make blind eyes see was in his path, he would have probably shouted his name to get His attention.  Even as Jesus spoke, the man did not recognize His voice.
But on this day Jesus was simply in the mood to do a miracle; to demonstrate to an unbelieving people that He was indeed the Light of the world who had stepped into the world of darkness. After correcting the theology of the disciples on the cause of the man’s blindness (vv. 2-5), “He [Jesus] spat on the ground and made clay with the saliva; and He anointed the eyes of the blind man with the clay. And He said to him, ‘Go, wash in the pool of Siloam’ (which is translated, Sent). So he went and washed, and came back seeing” (vv. 6-7, NKJV).  It is quite possible that if the man could have seen what Jesus did before sending him off, he would have been offended.  Jesus spat on the ground, made clay, and anointed his eyes.  Sure Jesus could have simply said a word and he would have been healed, but Jesus did something for him that he could not see in order that he might see who Jesus was.  In other words, what the man could have been offended by, if he could have seen it, was not an act of uncleanness but a demonstrating of grace.  It was the blessing he could not see and because he could not see it, it never occurred to him to give God thanks.
The majority, if not all of us, are in the same position.  While we often thank God for the blessings we see, when was the last time you thanked Him for the blessings you cannot see?  The accidents He prevented that could have occurred as you went about your day?  The wheels He set in motion so you could receive an answered prayer?  The job you kept that you should have lost?  The pain and hurt you suffered to spare you even greater pain and hurt?  Stop and think about it. Even as you are reading this and though you are not able to see it, no matter the circumstances in which you find yourself, the Lord is blessing you right now!  And you didn’t even ask.  Perhaps you are not even thinking about Him, but He sees you nevertheless and is demonstrating grace.
Are you ever really out of things to thank God for? I didn’t think so. Me neither.

Easy going, dislike negativity, and an optimist. I believe that amidst the hustle and bustle of everyday living, each day is a gift from God and if we stop and think about it, there is at least one thing for which we ought to be thankful. In addition, I believe that every day is a great day to be alive. No matter how bad we think we have it, there are any number of people who are on the "other side" who, if they could, would gladly trade places with us. Email me at church[email protected]