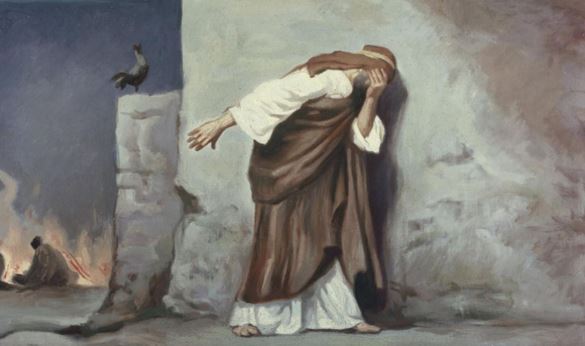 Jesus had warned him but it seemed he had forgotten. In the aftermath of Jesus’ betrayal and arrest, he sat outside the palace contemplating the turn of events when he was accused of being one of Jesus’ followers. He denied it. Two more times similar accusations were made and on both occasions, he did the same thing. Immediately after the third denial, mixed with cursing and swearing, the cock crew. According to the narrative, “And Peter remembered the [prophetic] words of Jesus, when He had said, ‘Before a rooster crows, you will deny Me three times.’ And he went outside and wept bitterly [in repentance]” (Matthew 26:75, AMP).

Peter must have been devastated. He was one of Jesus’ most solid supporters. It was he who had acclaimed of Jesus, “You are the Christ (the Messiah, the Anointed), the Son of the living God” (Matthew. 16:16). He was there at Jesus’ transfiguration (Matthew. 17:1-6). He had witnessed just about every miracle. Jesus was not only his Lord but also his friend. He had meant it when he said earlier, “Even if I have to die with You, I will not deny You!” (Matthew 26:35). Yet when faced with the reality of the cost of following Jesus, the pressure got to him. He denied his friend; denied even knowing Him.

Fast forward almost two thousand years and as disciples of Jesus living in a world increasingly hostile to Christ and His followers, our challenge is no different than Peter’s. Filled with good intentions of standing up for and with Jesus, how do we respond when those around us challenge our stand? Do the people in our sphere of influence even know we are with Jesus? Peter knew that if he admitted being one of Jesus’ disciples, he would be arrested and possibly killed. To save himself, he denied any association with Him. At a time when it is not cool to be a Jesus follower, do we take our stand with Him or do we give Him up when we deem the cost of standing with Him to be too high?

The next time you sing Israel Houghton’s “I am a friend of God,” ask yourself exactly what does that mean. Jesus was both betrayed and denied not by people who were hostile to Him but by friends. What kind of a friend are you to Him? Friend enough to say, regardless of cost and circumstances, “I am with Him?”