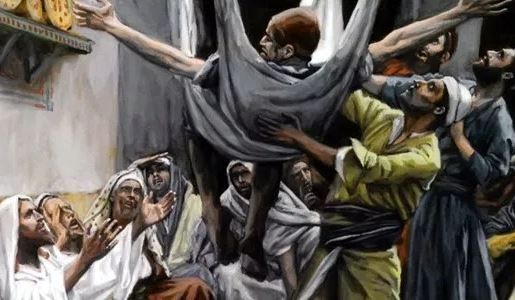 The house in which Jesus was teaching was packed with people who had come from all over Capernaum to hear Him speak. It was then that the four men came. Even if they were by themselves there was no room for them because not only was the house packed, but its entrance was so jammed that “no one could get in or out” (Mark 2:2, The Message). But they were not alone; they had brought with them a man, perhaps a family member or friend, who was paralyzed and whom only Jesus could heal. The problem was they were not likely to receive any sympathy from those present.  No one was going to let them in.
In an act of creative desperation, the friends decided there was only one way to get Jesus’ attention. The narrative continues, “When they weren’t able to get in because of the crowd, they removed part of the roof and lowered the paraplegic on his stretcher” (v.4). Back in the day, houses in the east were generally flat-roofed and people engaged in social activities on them (remember David strolling on the roof of the palace when he saw Bathsheba – 2 Samuel 11:2). A trap door led from the roof into the house and it was this door that the men removed. If they could not get him in through the door, they were going to use the next best available option. They would do whatever it took to ensure Jesus was aware of the man with the palsy. After all, the fact that he had to be carried said a lot about his condition.
We are not told that the man or his friends professed faith in Jesus’ ability to heal him. In fact, up to this point, no words were exchanged between them and Jesus. However, in this instance words were not necessary because their actions spoke volumes about their faith. It could not have been easy to get the man on his stretcher, which was “probably a mattress, or perhaps a mere blanket spread to lie on, so as to be easily borne” to the roof but they did it. The text tells us, “When Jesus saw their faith” and after responding to the religious leaders on some points of objection they raised, He said to the man, “‘Arise, and take up thy bed, and go thy way into thine house.’ And immediately he arose, took up the bed, and went forth before them all; insomuch that they were all amazed, and glorified God, saying, ‘We never saw it on this fashion'” (vv. 11-12, KJV).
The situation was desperate and it demanded desperate action. These men could have been easily discouraged by the crowd present but to have done so they would have missed Jesus’s miracle. Nowhere in the text are we told that anybody else was healed while He was in the house. These men knew where He was and were not prepared to allow obstacles to stop them from reaching Him. Do you have that desperate kind of faith? Is there something pressing you need that only God can provide? No, we do not have to take off roofs to reach Him but what was true then is still true today: faith moves the hand of God and without it, it is impossible to please Him (Hebrews 11:6).
Are you prepared to do whatever it takes to get your miracle? If so, what is stopping you from doing what you need to do?