WEEKLY DEVOTIONAL - "Not this man [Jesus], but Barabbas!"  - Jamaicans.com 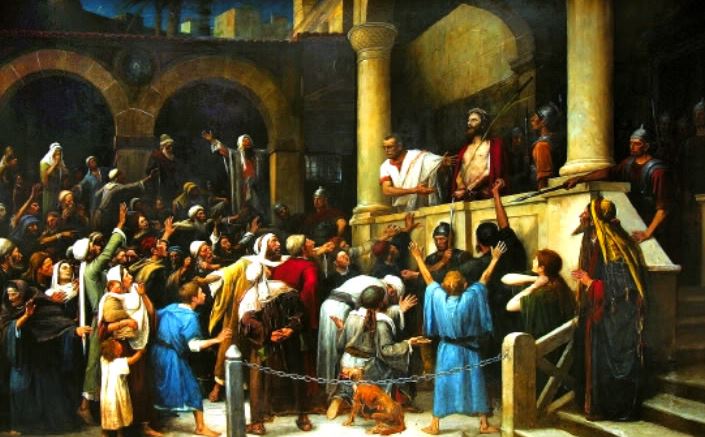 As Jesus stood with Pilate, Pilate looked at Him with disbelief and skepticism. How could this man be the king of the Jews as they had charged? An itinerant preacher moving from place to place in the cities with people who were willing to follow Him was not a crime. More importantly, He was not a threat to Rome. He was not like the other freedom fighters the Roman army had to fight with as they tried to liberate themselves and their nation from the oppression of Roman rule. Albert Barnes in his commentary writes, “He [Pilate] regarded him, clearly, as a fanatic poor, ignorant, and deluded, but innocent and not dangerous.” And so being satisfied that Jesus was not a king, at least not in the sense of which He was accused by His fellow Jews, and therefore not a threat to the establishment, Pilate declared Him innocent.
It was the custom then that at Passover one prisoner would be pardoned (John 18:38). Pilate sought to have Jesus released under this custom but the crowd would have none of it. The narrative tells us, “Then cried they all again, saying, Not this man, but Barabbas. Now Barabbas was a robber” (v. 40). The last four words in that verse–“Now Barrabbas was a robber”–present an interesting contrast in that he was not just a robber, but one of the freedom fighters. In they eyes of the crowd shouting his name, unlike Jesus, Barrabbas had tried to do something for them. Like the other freedom fighters, he was regarded as a hero. It wasn’t that long ago that Jesus was seen as such by some of these same people, for when they heard that Jesus was coming to Jerusalem for the Passover, they “took branches of palm trees, and went forth to meet him, and cried, Hosanna: Blessed is the King of Israel that cometh in the name of the Lord.” (John 12:13). Somewhere between then and that first Good Friday, they grew disappointed with Jesus as the promised Messiah. He failed to liberate them from the Romans and clearly had no such intentions. Faced with the choice between a freedom fighter and the Son of God, they chose the freedom fighter.
Today as we celebrate another Good Friday, we are faced with the same choice. Have we become disappointed with Jesus? Has He failed to “deliver” what we expected of Him? Did we expect that our bank accounts would always be healthy? That hardships would be a thing of the past? That our journey through this life would be easy? Because if that is what we expected when we accepted Him, then we would have missed the real reason He came into the world. John tells us, “For God so loved the world, that He gave his only begotten Son, that whosoever believeth in Him should not perish, but have everlasting life” (John 3:16).  To that end, “He was wounded for our transgressions, He was bruised for our iniquities: the chastisement of our peace was upon Him; and with His stripes we are healed” (Isaiah 53:5). He came to restore, to heal the relationship between God and man and it was only through His sacrificial death on the cross could this be made possible.
Our outward circumstances may not reflect our inner realities. As we reflect on  the death of Jesus, let us remember there was a resurrection three days later.  But today we look at the cross in the middle with much thanksgiving for in that bloody spectacle is our redemption. We should have been the ones on that cross, but He came and took our place. He paid the debt He did not owe because we owed a debt we could not pay. He paid the price on our behalf that we might have life and have it more abundantly. Like the Apostle Paul we too can say, “Thanks be to God, which giveth us the victory through our Lord Jesus Christ” (1 Corinthians 15:57).
“Then cried they all again, saying, Not this man [Jesus], but Barabbas.” Whom do you choose?
Rate this post