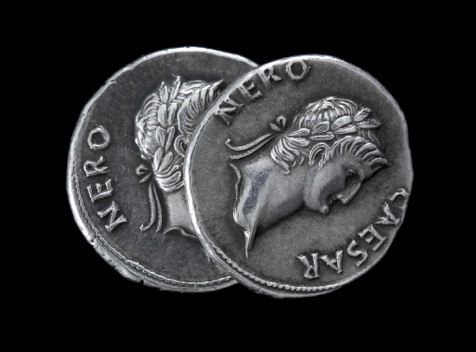 It was yet another trap and the synoptic writers said as much. The scribes and chief priests had sent certain of the Pharisees and some followers of Herod to try and bait Jesus, “hoping to catch Him saying something incriminating” (Mark 12:13, The Message). Mark continues, “And when they were come, they say unto Him, ‘Master, we know that thou art true, and carest for no man: for thou regardest not the person of men, but teachest the way of God in truth: Is it lawful to give tribute to Caesar, or not? Shall we give, or shall we not give?’ But He, knowing their hypocrisy, said unto them, ‘Why tempt ye me? bring me a penny, that I may see it.’ And they brought it. And He saith unto them, ‘Whose is this image and superscription?’ And they said unto him, ‘Caesar’s.’ And Jesus answering said unto them, ‘Render to Caesar the things that are Caesar’s, and to God the things that are God’s. And they marvelled at Him'” (vv. 14-17, KJV).
The groups of men working in collusion to trap Jesus had their own differences and were not always amiable towards each other. However, they were united in a common cause. Wise in their own eyes, the question asked of Jesus was a political hand grenade for if Jesus answered “yes” He would be branded a friend of the Romans, and if He answered “no” He would be branded a traitor. Of course, Jesus saw through their hypocrisy and gave them an answer that was so profound, they “marvelled at Him.” Because Caesar’s image was etched on the coin, it was due to Caesar. Or as Matthew Henry observes, “The circulation of the money is from him as the fountain, and therefore it must return to him.” Interestingly, Jesus did not stop there for while rendering to the emperor what belonged to the emperor, they were to render to God what belonged to God. What does that mean? What was Jesus getting at?
The clear implication in Jesus’ statement is that in the same way that the coin, imprinted with Caesar’s image, was ultimately his and so was due to him at tax time, so we who are engraved with the image of God ultimately belong to Him. The Bible is clear that we are created in the image or likeness of God (Gen. 1:26). The created belongs to the Creator and so in the same way that we give to the various levels of governments their due, so we must be diligent to give to God His due; ourselves and all the gifts and talents we possess. Like the hymn writer Francis R. Havergal, our prayer should always be, “Take my life and let it be / Consecrated, Lord, to Thee / Take my moments and my days / Let them flow in endless praise.” A life of endless praise is the “perfect” offering we can offer to the One to whom we belong.
“Render to Ceasar the things that are Caesar’s, and to God the things that are God’s.” How are you doing in that regard?