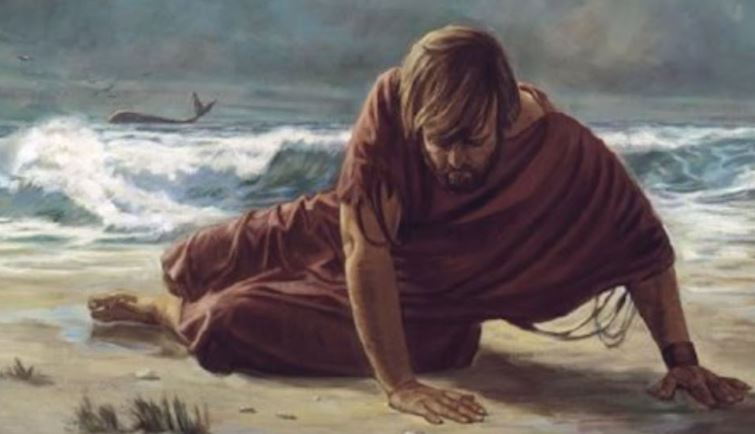 Poor Jonah.  His plan to take a break from his prophetic duties to avoid going to Nineveh to prophesy against it, as God had told him to, had fallen apart.  Instead of relaxing at a villa in Tarshish, the ship he was traveling on had experienced a violent storm.  When it was determined that the storm was a direct result of him running away from God, he was thrown overboard. He almost drowned, he got swallowed up by a “great fish” by the order of God, and after three days and three nights of prayer meeting and repentance in the fish’s belly, he was “vomited” out on dry land, again by the order of God (see Jonah 1 and 2). To his credit, Jonah took full responsibility for the mess he found himself in.  He had tried to run away from God, but the “great fish” that had served as the vessel of his deliverance had also delivered him back to God. Jonah discovered what Job and all those who tried to resist God had found out: “No one can oppose you, because you have the power to do what you want” (Job 42:2, CEV). As he planned, so did God.

Covered in the contents of the fish’s stomach and lying on a beach somewhere, Jonah did not know what would happen next.  Maybe he would be able to go home and since God had already dealt with him, just maybe He would leave him alone now that he had disqualified himself.  However, instead of giving up on Jonah, God was not finished with him yet.  Right where he was, God spoke to him.  In an amazing demonstration of grace, the narrative tells us, “And the word of the Lord came unto Jonah the second time” (Jonah 3:1, KJV).  Though he had rebelled against God, God’s plans for Jonah had not changed.  He gave him the same instructions: “Arise, go unto Nineveh, that great city, and preach unto it the preaching that I bid thee” (v. 2).  This time, having learnt his lesson, “Jonah arose, and went unto Nineveh, according to the word of the Lord” (v. 3a).  The first time, “he rose up to flee” (Jonah 1:3); this time, he “rose, and went.” Bible scholar Albert Barnes observes, “True conversion shows the same energy in serving God, as the unconverted had before shown in serving self or error. Saul’s spirit of fire, which persecuted Christ, gleamed in Paul like lightning through the world, to win souls to Him.”

Through Jonah’s preaching, “the people of Nineveh believed God, and proclaimed a fast, and put on sackcloth, from the greatest of them even to the least of them. . . . And God saw their works, that they turned from their evil way; and God repented of the evil, that He had said that He would do unto them; and He did it not” (Jonah 3:5, 10).  One would have thought that having received a second chance, Jonah would have been happy for the people of Nineveh.  Instead, “but it displeased Jonah exceedingly, and he was very angry” (Jonah 4:1). He was right all along as he would later tell God, “I fled before unto Tarshish: for I knew that thou art a gracious God, and merciful, slow to anger, and of great kindness, and repentest thee of the evil” (Jonah 4:2). What Jonah failed to appreciate was that he was just a player in God’s plan for Nineveh.  All that was required of him was that he did his part and allow God to do His. We do not get to tell God how He should deal with others.

Our God is the God of second chances.  While some people are quick to “write off” those who have failed, often holding their actions against them, God has a track record of using those whom others deem as failures.  We need only look at David, a man after God’s own heart. As David Sanford points out, he “broke half of the Ten Commandments in one fell swoop. Coveting. Abuse of power. Adultery. Treachery. Murdering one of his most loyal men, marrying his widow, and covering it up.”  Yes, he failed and did so miserably, but one of his more redeeming qualities was his complete and open honesty with God.  If God could use him in spite of his failures, He can use you and me in spite of ours.  In John 3:17 we read, “For God sent not his Son into the world to condemn the world; but that the world through Him might be saved.”  We are also reminded, “If we confess our sins, He is faithful and just to forgive us our sins, and to cleanse us from all unrighteousness” (1 John 1:9).  It starts right there.  As we do our part, God will do His. His desire is not to condemn but to transform.  I am grateful; you should be too.