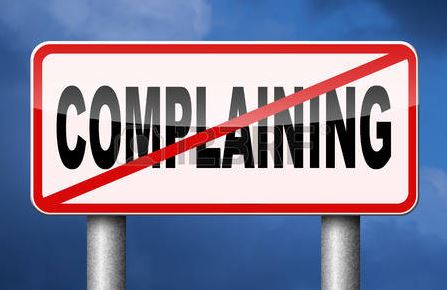 There is no easy way to say it – being around some people can be downright depressing. To listen to them speak is like reading from a book of complaints. They are often joyless, hardly ever satisfied, and their perspective on life is so skewed that their cup is always half-empty, never half-full. To tell them a cheerful “Good Morning” is to be met with an attitude that says “What’s good about it?” and to do them a favour is to be viewed with suspicion. Simply put, these people could wear out a saint.
At different times in its history, the nation of Israel was like that. In various portions of the Old Testament narratives we read of them “murmuring,” more accurately, “complaining” (e.g. Exodus 15:24; 16:2; 17:3, KJV). This despite obvious signs of God working miraculously in different situations on their behalf. According to the Psalmist, “Our fathers understood not thy wonders in Egypt; they remembered not the multitude of thy mercies; but provoked Him at the sea, even at the Red Sea. . . . Wondrous works in the land of Ham, and terrible things by the Red Sea. . . . Yea, they despised the pleasant land, they believed not His word: But murmured in their tents, and hearkened not unto the voice of the LORD” (106:7, 22, 24-25). Can you hear them? Murmuring had become so much a part of them that they no longer listened to the voice of the LORD. That is dangerous ground to stand on.
The LORD was not amused. The narrative tells us, “And when the people complained, it displeased the LORD” so much so that “the LORD heard it; and His anger was kindled; and the fire of the LORD burnt among them, and consumed them that were in the uttermost parts of the camp” (Numbers 11:1). Space limitation do not allow us to go fully into the verse, but it is worth noting the LORD’s initial response to the complaining: “And when the people complained, it displeased the LORD.” These are sobering words that we need to keep in mind the next time we are tempted to complain. For sure, things do not always go our way and at different times we have to face challenges, but let us not forget that God can and often use those situations to and for our benefit (Romans 8:28-29). Let us trust Him instead of complaining. He is very pleased with that.