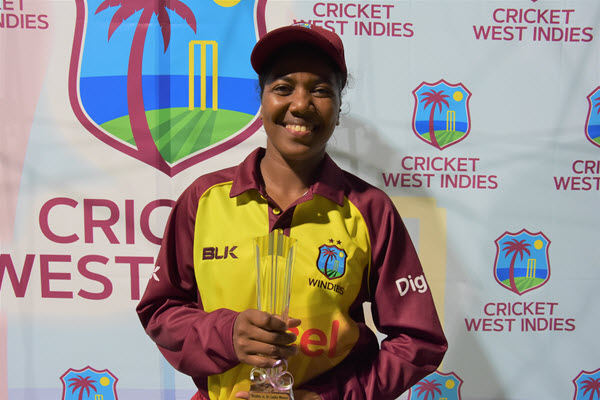 Scintillating fielding and a magical 5/13 wicket haul for Afy Fletcher saw the Windies Women take an unbeatable 2-0 series lead in the 3-match T20I series vs Sri Lanka at the Coolidge Cricket Ground in Antigua.

Stafanie Taylor won the toss and the Windies took first strike. Hayley Matthews fell in the first over for 0. Deandra Dottin then joined Taylor and the two experienced players posted 45 runs for the second wicket, when Dottin departed for 27.

Kycia Knight joined her Captain and the pair posted the highest partnership for the match of 49 runs. But Taylor fell one run short of a brilliant half-century, for 49. Merissa Aguilleira was then out for 5.

Britney Cooper then shared in a 30-run partnership with Kycia as the pair looked set to take the Windies past the 140 total from the first match on Thursday (October 19). But Cooper was trapped lbw for 23. Kycia was then joined by her twin sister Kyshona who then produced some batting fireworks, hitting a six and 3-fours on her way to 19 off 7 balls.

The Windies Women posted 154/6 from their 20 overs. Sri Lanka Captain Inoka Ranaweera had the best bowling figures for her team, taking 2/47.

Sri Lanka had 33 runs on the board before they lost Hansika for 22. Next best batter for the visitors was Chamari Athapaththu who top-scored with 30.

But the second innings belonged to Afy Fletcher. She spun magic with her off-spin, to wrap up the Sri Lanka middle and lower order batters. Sri Lanka 107 all out. Afy Fletcher finished with 5/13 and Hayley Matthews 2/25. Afy Fletcher was Player of the Match.

Shakera Selman suffered an injury while fielding and is currently under observation.

The final match of the series is on for this evening at 6:30 at the Coolidge Cricket Ground in Antigua.