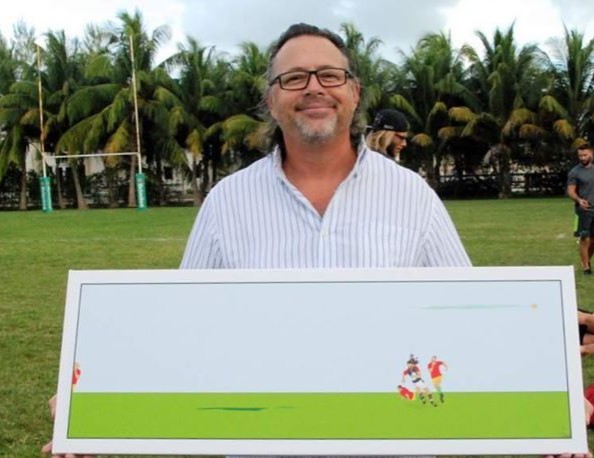 The Ritz-Carlton, Grand Cayman, has the biggest hotel suite available in the Caribbean. Known as “Seven South,” the suite comprises a penthouse and adjoining bedrooms. In total, the accommodation occupies 18,000 square feet on top of the hotel’s Ocean Tower. The three-bedroom penthouse costs $25,000 per night. There is an option to add three adjoining two-bedroom suites as well. The suite includes a movie theater, kitchen, dining room, office, and a large deck that overlooks the white sands of Seven Mile Beach. In fact, the accommodation’s many luxury amenities center on the beach environment.

A part of its unique design, “Seven South” features the work of the artist Shane Aquart, known as Dready, who was born in Jamaica and is now based in the Caymans. The artist was commissioned to design a digital artwork for the living room. The work is meant to capture the view of the waterfront from the suite’s terrace. The artist began his career at the Art Wall bridge at the hotel, one of the island’s most significant galleries. It features a 305-foot walkway that offers a place for local artists to showcase their work. Dready became the best-selling artist in this venue with his pieces depicting the Caribbean in vivid and vibrant colors. For guests staying at Seven South, Dready will provide a customized, 14-x-7-inch version of the work on display in the suite by adding the guest party to the balcony scene.

Shane Aquârt received his education in the United Kingdom, Canada, and the United States. He lives on Grand Cayman and has dedicated his life to his artistic vision. He has created a series of unique, Caribbean prints that are called “Dreadys” in limited editions. The artist has describe “Dreadys” as a combination of Pop and Poster Art, but insists that the work is a “thing of its own” that is meant to convey “vibe and verve and humor and life.” Although he has been called a “guerilla artist,” Shane questions that label. He acknowledged that he has never been mainstream, but notes his work is displayed in many mainstream galleries.