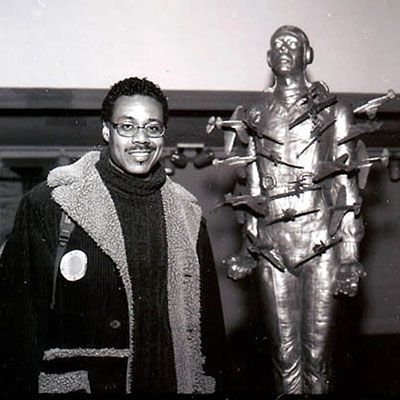 Jamaican Michael Richards, standing next to his work “Tar Baby vs. St. Sebastian”; many of Richards’ works were inspired by the Tuskegee Airmen

A sculpture by Jamaican-born artist Michael Richards has been added to the permanent collection of the North Carolina Museum of Art (NCMA). Richards was killed in the terrorist attacks on the World Trade Center in New York City. His studio was located on the 92nd floor of Tower One. His piece entitled “Tar Baby vs. Saint Sebastian 1999) is now on display in at the Modern and Contemporary Galleries at the museum. It commemorates Richards’ life, his talent, and represents a kind of memorial to the events of 9/11. The sculpture, which was cast in resin and fiberglass from Richards’ body, shows an airman, painted gold, and penetrated on all sides by small airplanes in a way that suggest the arrows shot at the early Christian martyr, St. Sebastian. The title of the work references both the saint and a southern folktale involving entrapment, and it honors the Tuskegee Airmen, African-American pilots who made heroic contributions during World War II. The piece is on loan from Richards’ estate.

Richards died, aged 38, in the World Trade Center in the September 11 attacks. He produced the sculpture  in 1999, which was 3 years before the 911 attack.

Photo: The Studio Museum in Harlem