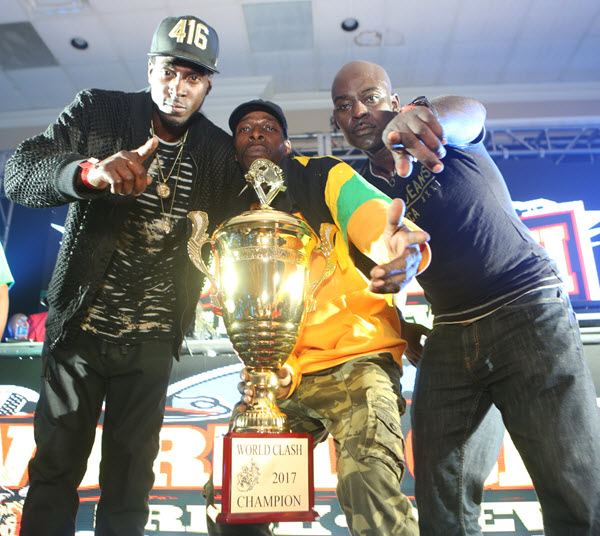 2x World Clash winners King Turbo are musically armed, dangerous and dead set on a winning streak, as they ready to compete for a second time in “Sound Clash at Sea” — the annual sound clash aboard the “Welcome to Jamrock Reggae Cruise.” Winning Irish and Chin’s World Clash grants the Canadian sound a chance to compete in the popular “Sound Clash at Sea,” where they will face off against Mighty Crown, Tony Matterhorn and David Rodigan.

King Turbo, featuring Slingshot and Ricky Turbo, edged out a fierce line up of contenders at World Clash with just the right music selections, hard hitting speeches and overall chemistry with the crowd. King Turbo’s mix of attributes was the perfect recipe for victory, which they aim to repeat during the highly anticipated “Sound Clash at Sea” on Thursday, November 16 (the Welcome to Jamrock Reggae Cruise sails November 13 – November 18, 2017). The Canadian sound certainly has the ability to win, as much to their credit, King Turbo is one of the very few sounds to hold 3 consecutive Irish and Chin clash titles, including Canada Rumble 2016, World Clash 2016 and World Clash 2017.

Notably, after King Turbo “kills” their competition on the cruise, the World Clash champs will unleash their musical fervor over the Thanksgiving Holiday Weekend during “Money Pull Up,” a intense annual juggling event that features David Rodigan and Mighty Crown in Hartford, Connecticut on Saturday, November 25. The King Turbo calendar is looking quite nice, as they also boast a number of upcoming European dates.

Sound clash is certainly in the air, as revelers await “Sound Clash at Sea,” one of Welcome to Jamrock’s most climactic events. As the cruise captures all aspects of Jamaica’s rich music culture, more than 3 years ago, Garfield “Chin” Bourne of Irish and Chin joined forces with Damian “Jr. Gong” Marley to further highlight sound clash culture. The result was the staging of an authentic annual clash aboard the cruise and entry of Irish and Chin World Clash winners into the epic competition. Marley has been a fan of sound system culture all of his life.