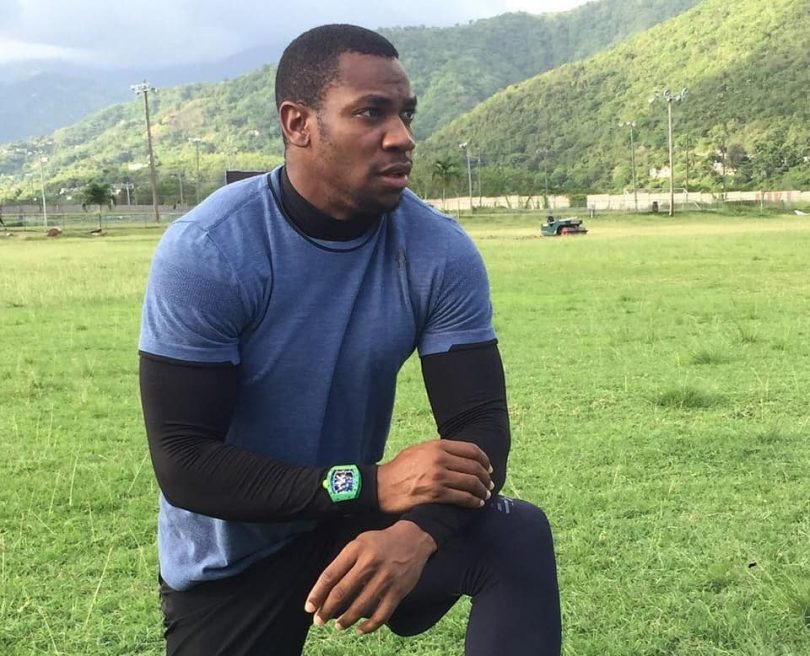 On this day in Jamaican History: On December 26, 1989, Jamaican sprinter, Olympian and former 100 meters World Champion Yohan “The Beast” Blake was born in St. James, Jamaica. He attended St. Jago High School in Spanish Town. While his first sports interest was cricket, where he was a fast bowler, his school principal encouraged him to try sprinting when he saw how fast Blake ran to the wicket.

As a junior sprinter, Blake ran the fastest time by a Jamaican junior in the 100-meters at 10.11 seconds. He set this record in 2007 at the CARIFTA Games in Turks and Caicos. At the competition, his team also won gold in the 4×100-meter relay. Blake was given the Austin Sealy Trophy for his performance as the most outstanding athlete at the 2007 Games.

In 2012, Blake competed in his first Olympics, and he represented a threat to Usain Bolt in the 100 meters. He came in second to Bolt in the final and won the silver medal with a time of 19.44 seconds. At the Athletissima Diamond League meet in Lausanne, Switzerland, Blake ran the 100 meters in 9.69 seconds, which placed him n a tie with Tyson Gay as the second-fastest distance behind Bolt.

In 2013, Blake had a hamstring injury and he failed to qualify for the 200-meter event at the Moscow World Championships. He competed again in 2014 and placed sixth in the 200-meters at the Lausanne Diamond League meet with a time of 20.48 seconds. He had another hamstring injury and fell at the Glasgow Diamond League event in the 200 meters, which ended his season. Blake raced again in 2015 but failed to advance from the semi-final in the Jamaica Outdoor National Championships in the 100 meters, coming in ninth.

Blake made a strong comeback during 2016 when he ran his first under-ten-seconds 100-meter distance since 2012 with a time of 9.98 seconds at the Kingston MV1 Track and Field meet. He then defended his 100-meter and 200-meter national titles. He moved into the 100-meter final at the 2016 Summer Olympics, coming in fourth with a season’s best time of 9.93 seconds. He won his second career Olympic gold medal by running the third leg of the 4×100 relay as well.

In 2017, he anchored the 4×100 meter relay team at the IAAF World Relays to bring home a bronze medal, and later in the season, he ran the 100-meters in times similar to his 2016 season. He attained a double at the Jamaican National Championships with gold in the 100-meter and 200-meter races. At the 2017 World Championships in Athletics in London, Blake finished in fourth place in the 100-meter final.

Blake began the season in 2018 early to prepare for that year’s Commonwealth Games, where he was considered a favorite. He qualified for the 100-meter final with the fastest time in the event heats. However, he stumbled out of the blocks at the final and was unable to recover, third with a time of 10.10 seconds. He won a bronze medal at the Men’s 4×100-meter relay and then focused on the Jamaican National Championships. A false start in the semi-finals disqualified him, however.