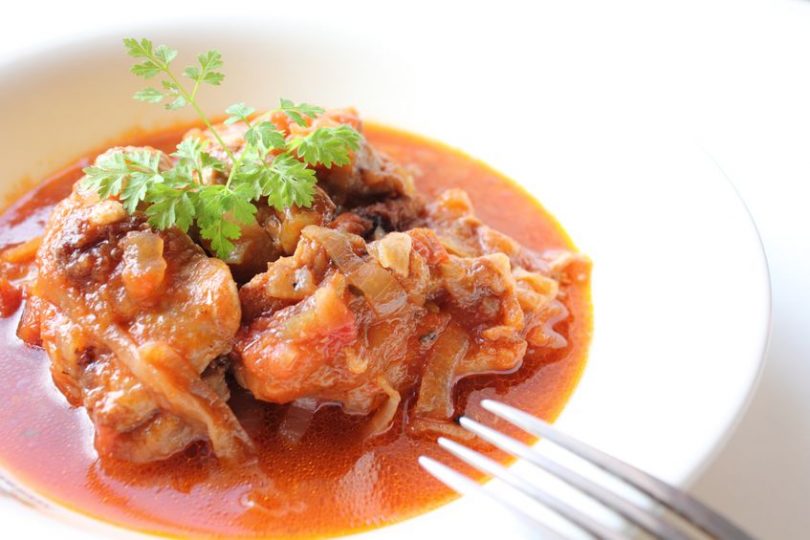 The cuisine of Curacao is a flavorful blend of Dutch and Indonesian, with hints of other international fare mixed in as the country is home to some 45 nationalities. The menus of Curacao include exotic items such as iguana stew and fried iguana, fried cactus, stuffed cheese, and funchi. And of course the famous Curacao liqueur is popular among island diners. Try the five foods listed below on a visit to Curacao.

1. Keshi Yena
This has been called the national dish of Curacao. It consists of a gouda or Edam cheese stuffed with meat, typically spiced chicken, along with olives, capers, onions, and tomatoes. It is baked until the cheese melts. While the origins of the dish are uncertain, it is believed that it dates from the slave trade days on the island when kitchen workers would eat leftover cheese rinds stuffed with discarded pieces of meat. 2. Yuana Stoba – Iguana Stew
Island locals call the Iguana “tree chickens,” and use the meat in a variety of dishes. The most common preparation is to serve iguana in a stew, which is believed to have aphrodisiac properties. The meat is bony and has been described as a combination of frog, rabbit, and chicken flavors.

3. Curaçao Liqueur
This famous liqueur is a must-try on the island of its origin. It was discovered by accident when the Spaniards, who had transported sweet Valencia oranges to the island found that it did not flourish because of the different climate. They had to settle for the bitter Lahara orange, and subsequently made this well-loved beverage from that fruit.

4; Kadushi – Cactus Soup
Cactus plants grow in profusion on Curacao, and so its people have added it to their diet. In preparing the soup, the cactus spines are removed and the skin removed. It is then sliced to access the “meat” of the plant, which is inside. The meat is boiled in a broth, with traditional kitchen utensils made of tree branches used to stir it as it cooks. The soup is green and has a slimy texture, but it is a truly indigenous and authentic Curacao dish.

5. Bolo Pretu – Black Cake
This traditional cake is served at weddings and other important celebrations. It is a fruitcake made with Curacao liqueur and various fruits, including dates, raisins, cherries, plums, and pineapple. It is sweetened with a syrup made from brown sugar and dark corn syrup with addition of pineapple or other jam. The liqueur – or other alcoholic beverage such as spiced wine, rum or cherry cordial – is poured into the mix. A regular cake batter is made with butter, brown sugar, flour, vanilla and almond extracts and blended with the fruit-alcohol mixture. It is dense and flavorful and a definite must-have on the island.