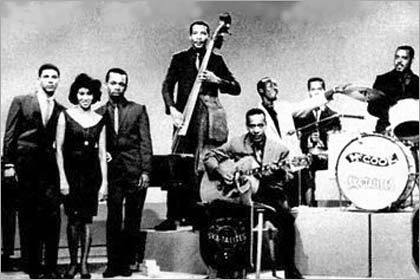 Jamaica is a country that places a high value on music. It is home to a variety of genres, Some of the most popular genres on the island include Ska, Rock Steady, Dub, Mento, Reggae, and Dance Hall. Ska and Rock Steady created a new social trend characterized by “Rudeboys.” Rudeboys were individuals and musical groups who dressed in black-and-white clothing to express the disparities in social conditions between blacks and whites in their communities. In 1966 and 1967, the term “rudeboys” can to mean “gangsters” in Jamaica, Gangster on the island were young people who were victims of poverty and negative social conditions who turned to lives of crime to survive. In Britain, the label “rudeboys” was used to describe a stylishly dressed, happy, dancing man who wore a fedora.

Ska was created in the early 1960s and has been described as a fusion of Jamaican Mento rhythms, R&B and American music. Ska was popularized by the middle class in a dance of the same name. Singers like Lascelles Perkins, Laurel Aitken, and Clancy Eccles were instrumental in promoting ska, which rose to the top of the music charts. The Skattellites were a very popular group that was devoted to the genre as well.

The Rock Steady sound swept through Jamaica as dance music and then spread overseas to countries like the United Kingdom and the United States. Desmond Dekker was the first Rock Steady band. The band arrived on the scene in 1967 with hits like “Shanty Town” and “Israelites.” Their sound was particularly embraced by English working class people known as  “skinheads” and also by middle-class Jamaicans. The demand for Rock Steady continued to grow, prompting the creation of an offshoot genre known as “skinhead reggae.” This music was produced by groups like Symarip, Derrick Morgan and Desmond Dekker.

The Reggae genre evolved slowly during the early 1970s and was popularized by musical artistes like Bob Marley, Peter Tosh and Bunny Wailer. Reggae’s lyrics about love, redemption and natural beauty captured international audiences around the world.

Dub emerged in the mid 1970s as the enhanced musical versions of an artiste’s works. Dubs consist of previously recorded songs remixed with bass. Dub records were developed by Lee “Scratch” Perry and King Tubby. Artists such as U-Roy and Big Youth were well known for their dub records and  a whole new generation of “Dubbers” were born. Teenagers of the era embraced dub music at parties and social gatherings.

Mento has a nostalgic attraction for Jamaicans. The music comprises folk music, Mento instrumentation and Calypso. The first artists to perform Mento were the “Cudjoe Minstrels.” The Hon. Louise Bennett-Coverly turned Mento into an International art form with songs such as “Wheel and Tun Me” and “Long Time Gal Me Nevva See You.”

Dance Hall was started by the so-called “Big Three:” The Prince Buster, The Duke Reid and Sir Coxson Dodd. Dance Hall is a form of music that uses “catchy” tunes, lyrics, and foot stomping. It is considered “rebel music” by some Jamaicans, and the genre has been blamed for violence, drug use and delinquency. Dance Hall is a musical genre that reflects the nature of the country, its feeling, and the tribulations of its people.

A six Jamaican musicians have served as ambassadors to the world, representing reggae, ska and dub genres.

Also known as “Tuff Gong,” Bob Marley was born on February 6, 1945, in St. Ann Parish, Jamaica. Bob Marley has become a legend as a reggae singer and song writer. He celebrated the genres of ska, reggae and rock steady in his songs. He is best remembered for being the lead singer of Bob Marley and The Wailers, and for songs such as, “I Shot The Sheriff,” “No Woman No Cry” and “Redemption Song.” Bob Marley died on May 11, 1981, of cancer.

Born Winston Hubert McIntosh on October 19, 1944, in Grange Hill, Jamaica, Tosh was a Reggae musician and original member of the Wailers. Known for recordings like “Catch a Fire,” “Burnin” and “Legalize It,” Peter Tosh wrote many of the Wailers songs, including “Get Up Stand Up!.” He died on September 11, 1987, at the hands of burglars who ransacked his home.

Born Neville O’Reilly Livingston on April 10, 1947, Bunny Wailer is a Jamaican singer, song writer and percussionist for The Wailers. Along with Bob Marley and Peter Tosh, he is considered one of the most important Reggae singers in world music. He earned fame through albums entitled “In I Father’s House,” “Blackheart Man” and “Roots Radios Rockers and Reggae.”

He was born on June 27, 1956, in Clarendon, Jamaica. He has had a long career during which he has embraced all types of Jamaican music. He achieved success through songs such as “Big Ship,” “Stop Loving You” “Prophecy,” “Push Come To Shove,” “All In The Same Boat” and “I Was Born a Winner.” In 1984, he formed the record label Big Ship and opened Big Ship Recording Studios.

Born Hugh Beres Hammond on August 28, 1955, in Annotto Bay, h is a Reggae singer and song writer known for songs such as “Tempted To Touch,” “One Step Ahead,” “Groovy Little Thing” and “How Can We Ease The Pain, ” which he recorded with Maxi Priest.

Monty Alexander was born on June 6, 194. He is a master pianist and melodica player who has been performing Jamaican jazz music for the past 50 years. He plays the music of such great vocalists and composers as Frank Sinatra, Nat King Cole and Cole Porter. He is listed as one of the 50 greatest musicians of all time by author Hal Leonard. Alexander formed a Reggae band in the 1990’s, releasing albums such as “Monty Meets Sly & Robbie,” “Yard Movement” and “Goin Yard.”