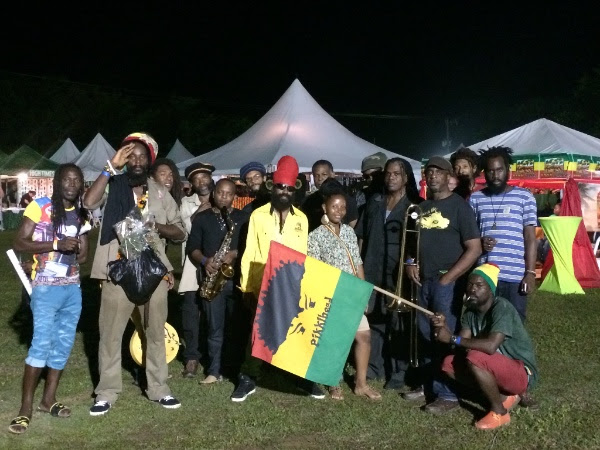 duBKor and The Pikkihead Band recently took the stage at the annual Rastafari Rootzfest, High Times Jamaica World Cannabis Cup, in celebration for the avocation of decriminalizing ganja in Jamaica.

You may remember duBKor from the 2013 album “Rastaman Riding”, mixed by Errol Brown, who was Bob Marley’s engineer. The album was remixed at the infamous Tuff Gong Studios in Kingston, Jamaica and reintroduced an enhanced version with added brass section and quality sound production of their original works from the “Arrogant Man” album. One of the hit songs off this album, “Little Love Story” received much esteem gaining heavy rotation airplay while the music video remained consistent in the number one spot on CVM for several weeks. Another favorite, “Defend The Ends”, gained much appreciation when the video generated over 100,000 views within a couple months from release. duBKor and the Pikkihead Band are expected to release their third studio album “Shackled and Chained” in January of 2016. duBKor’s music is rich with themes that resonate thought provoking views over a number of political and controversial social issues.

The artist duBKor is not shy to Rastafarian philosophies and the use of marijuana as a sacred herb to enhance reasoning sessions and spiritual enlightenment. The celebration in Negril, which took place at Long Bay Beach, seemed like a natural fit for the artist and band to endorse their beliefs and promote forward movement for the revisions of Jamaica’s Dangerous Drugs Act. “It was an honor to be part of this year’s annual concert series. I and I along with the Pikkihead Band seek to edify reggae music lovers on the benefits of ganja overall, in sacramental use, industrializing hemp, and how the legalization of the use of herb will aid in strengthening our economy for a better Jamaica”, claimed duBKor.