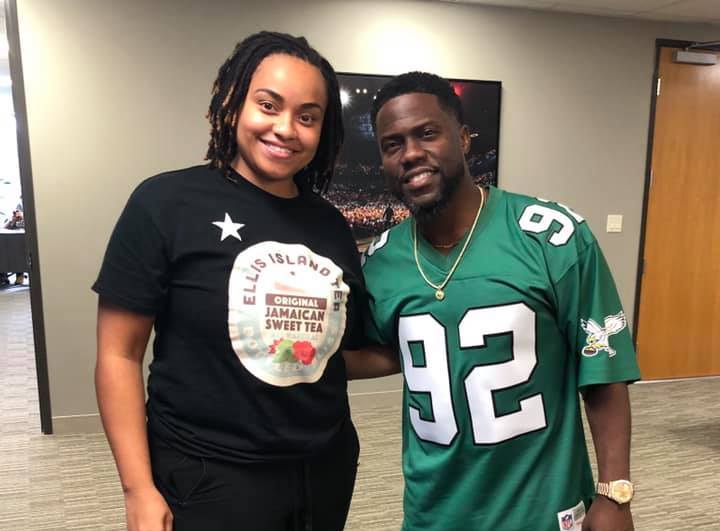 Comedian, actor, producer, and author, Kevin Hart, loves a good story and the tale of Nailah Ellis-Brown and the tea of her Jamaican great-grandfather is one in a million. The comedian was intrigued with the Detroit beverage maker’s tale and after learning about the history of her Ellis Island Tea, he decided to partner with her, which also means investing in Detroit.

” You cannot imagine how hard it was to contain this news! Well, the cat is out of the bag! Ellis Island Tea has landed investment from and is now officially partnered with Kevin Hart! Thank you for your belief in us, Kev! We are overfilled with excitement for what’s to come from this relationship!…Now I need y’all to go buy some tea because I gotta pay him back”, Nailah posted on the company’s Facebook page.

Ellis-Brown’s great-grandfather, Cyril Brown, was born in Jamaican and came to the U.S. via Ellis Island over 100 years ago. He brought the recipe for the traditional Jamaican sweet tea with him. Made with herbs, mint, rosehips, and hibiscus, the recipe has only been transmitted through the generations by oral tradition. Some might say it was destiny that Hart and Ellis-Brown should meet. When her name kept coming across his radar in various ways, he decided to investigate.

Hart’s interest and investment arrived at a critical time for the company, particularly in light of the COVID-19 pandemic. Ellis-Brown signed a deal with Walmart to offer her Ellis Island Tea at the company’s nearly 600 Sam’s Club™ locations beginning later this month. Its initial debut in Sam’s Club™ stores in Indiana, Michigan, and Ohio earned rave reviews.

The traditional Jamaican sweet tea is also available at Whole Foods and Meijer® stores. It will soon make its debut at CVS® and Target stores. Hart’s backing has resulted in sleek new packaging, competitive pricing, and expansion into e-commerce options.

Ellis-Brown’s own story is as unique as her tea. She dropped out of college at the age of 20. While living in her mother’s basement, she began making the tea in her mother’s kitchen and selling it from the back of her car. She launched her business in 2008 at the height of the recession.

She’s the only female African-American beverage maker in the U.S. In 2016, Forbes named her to its “30 Under 30” list. Ellis-Brown won Centric TV’s Queen Boss competition and is helping other entrepreneurs with their own company’s small-batch requirements. Hers is a pioneering spirit that resonated with Hart.

The comedian is a firm believer in building for the future, a philosophy he shares with Ellis-Brown. As she builds on the hopes and dreams of her ancestors, she’s also creating a legacy for her two daughters and providing jobs and opportunities for fellow Detroit residents.