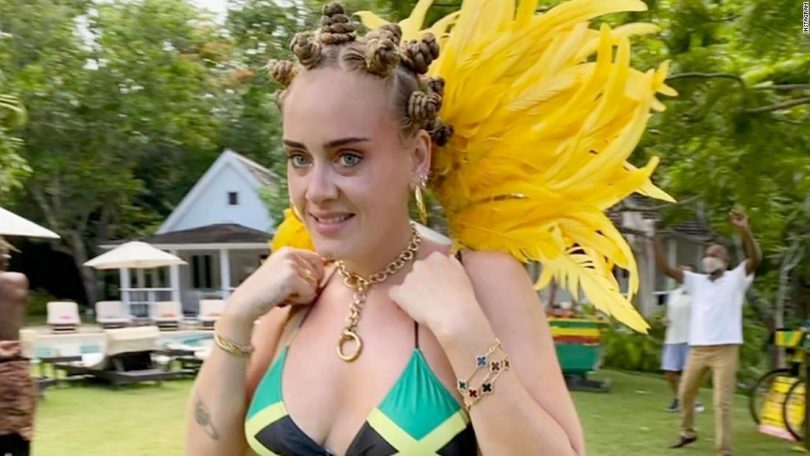 After the filming of her episode of “Saturday Night Live” (SNL), Grammy-winning guest host Adele ordered lots of food from her favorite Jamaican restaurant, Negril Village in New York City. According to reports, following the completion of her duties as the show’s guest host, the singer went “all out” to provide “loads of food” for the staff and crew who were clearly “on a high” after the filming wrapped. Adele herself dined on jerk chicken and a salad with mango.

The singer, 32, has made major changes in her lifestyle during recent months and has put an emphasis on healthy food options. For example, while she was working with SNL, her contract specified there had to be match green tea powder and an electric kettle available for her so she could make as much of the tea as she wanted. She was also provided with dark chocolate with almonds from Whole Foods and some “decent bottles of wine,” according to reporting from The Sun newspaper.

Adele made fun of her impressive weight loss on the show by stating in her opening monologue”I know I look really really different since you last saw me. But actually because of all the COVID restrictions and the travel bans, I had to travel light and I could only bring half of me, and this is the half I chose.” The singer, who was born in London, also noted her past history with the popular television show that “broke my career here in America 12 very long years ago.” Adele was the musical guest on the show in 2008, the episode in which Sarah Palin made an appearance with SNL regular Tina Fey, who impersonated her during the US Presidential election of 2008. Palin ran as vice-presidential candidate with John McCain on the Republican ticket. As Adele described it, “obviously a few million people tuned in to watch it and the rest is now history.” Adele has been the subject of controversy since she wore a Jamaican Flag Bikini Top and Bantu knots, a traditional African hairstyle, to mark the Notting Hill Carnival, an annual celebration of Caribbean and Black culture in the United Kingdom that was cancelled in 2020 due to the COVID-19 pandemic.

Critics called her fashion choices a matter of cultural appropriation, sparking a debate over the singer’s right to make those choices. In response to the criticism, Adele allegedly posted comments at Brandy and Monica’s Instagram Live in Patois, writing, “Wah Gwaan! Yow gyal, yuh look good enuh.” The debate on social media included some Jamaican fans who believed that Adele just wanted to show off her weight loss with the bikini and took the opportunity to share her appreciation of African culture. Other fans thought she had taken things too far with the Bantu knots. She received the support of many celebrities, however, including Naomi Campbell, James Whale, Zoe Saldana, Kiss Dj Manny Norte, and Piers Morgan.