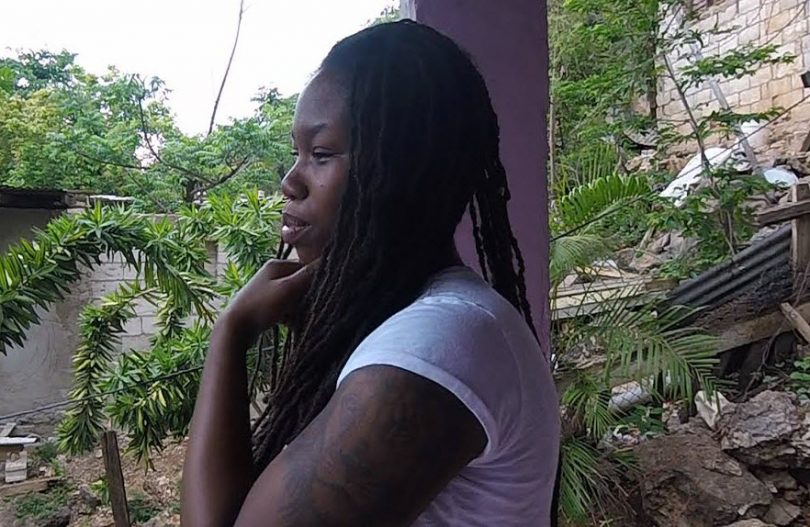 This is an exclusive pre-release of a song titled “Hotta Dan Fiyah” from Anita Antoinette soon to be released EP.

Anita is in Jamaica for a few days (April 14th to 19th) to do media promotion of her debut single Care. After an emotional visit to her old neighborhood, Anita and her Management decided to do a pre-release of a song titled “Hotta Dan Fiyah” from her soon to be released EP.

Anita was recognized as she walked across an empty field to see her old home on the gully bank, at the foot of the hill beside George Headley Primary School. Word quickly spread that Anita (sweety) came back home to visit and proud friends from the small community reminisced of her groundbreaking audition and performances on NBC’s Singing competition The Voice.  Anita has not been back to her homeland since she was 8 years old.

Anita Antoinette grew up dancing to the rhythm of her father’s songs, reggae icon Clinton Fearon in Kingston, Jamaica. She migrated to the United States in 1997, where she settled first in South Boston and then New Britain, Connecticut with her mother, brothers, and sister. A self-taught singer and guitarist, Anita began writing her own music as a teenager, inspired by her father and legends such as Bob Marley, India Arie, and Erykah Badu. She graduated from the prestigious Greater Hartford Academy of the Arts in 2008, and was accepted to the Berklee College of Music in Boston, Massachusetts, where she earned a Bachelor’s Degree in Professional Music with a Concentration in Music Business and Songwriting

Anita has performed on stages large and small throughout New England, the Northeast and the Pacific Northwest, including a 2008 appearance at the Library of Congress in Washington DC. She has appeared on the 3rd and 7th season of NBC’s hit show, “The Voice”. Her 7th season audition has been dubbed the second best audition in the history of the show by TV Guide and she worked her way to be one of the top ten finalists. She easily become one of the most loved and talked about contestants on “The Voice.”

In June of 2016 Anita Antoinette was appointed Caribbean American Heritage Month Musical Ambassador by The Institute of Caribbean Studies. As Musical Ambassador her responsibility was to bring awareness and celebrate the contributions Caribbean Americans make on the world and enhance Caribbean traditions. This gave Anita the opportunity to perform her single “Care” which was released on June 15th 2016 at The White House, Capitol Hill, and The Inter-American Development Bank.

Anita is presently working on her debut EP which promises to be an eclectic mix of reggae, blues, and hip hop with lyrics expressing peace and love.

An artist in every sense of the word, Anita Antoinette paints, writes poetry, draws and takes pictures while continuing to write and produce music.

Anita is available for phone, video and live interviews. Please contact Jason Walker at (678) 208 7371 to set up a time that is convenient.