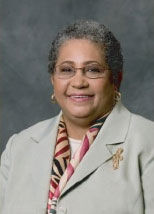 Dr. Hall is one of the foremost educators in the United States today. She is the superintendent of the Atlanta Public Schools (APS)–an urban school system of 96 schools with approximately 52,000 students and over 4,100 teachers. Under her leadership since 1999, this once low performing school system has embarked on a comprehensive school reform program. The results so far have been remarkable.

The APS is the nation’s only urban district where 100% of elementary schools met federal academic targets. Math and reading scores since 2003 have improved faster than any other urban school district. Schools once labeled “lowest performing” are being turned around and the system has shown a consistent eight year trend of progress. It was the only district in Metro Atlanta to be named as a Title I Distinguished School District.

Transforming the Atlanta public schools is “analogous to climbing a mountain” according to Dr. Hall who brings focus and a strategic vision to the task. She contends that “the victory will be won in grades one through five” as it becomes increasingly difficult and costly to change academic outcomes for students who are behind when they enter middle school. Dr. Hall has accomplished much, yet she realizes the steepest climb is still ahead. Last year, the school board voted unanimously and enthusiastically to extend her contract through the 2010-2011 school year – expressing confidence that she can lead APS to the mountaintop.

Dr. Hall was born in Jamaica and immigrated to the United States after attending high school at St. Hilda’s and St. Andrew’s. She earned her Doctor of Education degree from Fordham University.

Dr. Hall is also Chair of Harvard University’s Urban Superintendents Program Advisory Board where she mentors participants in the doctoral program. And she was a member of the Teaching Commission, which developed specific policy recommendations to address the teaching crisis in America.

In Atlanta, Dr. Hall was recently named to the board of Atlanta’s Grady Memorial Hospital, one of the largest public hospitals in the country. She also serves on several other boards including: Communities in Schools of Atlanta, Inc., and Junior Achievement of Atlanta, Inc.

In January 2007, Georgia Trend Magazine recognized Dr. Hall as one its “100 Most Influential Georgians.” She has won numerous other awards including the “Flame of Excellence” award from the Metro Atlanta Chamber of Commerce; the Council of the Great City Schools Richard R. Green National Urban School Superintendent of the Year Award; the 2006 Big Brothers, Big Sisters of Metro Atlanta, Inc. Legacy Award; the 2006 Effie H. Jones Humanitarian Award from the American Association of School Administrators; the 2008 Pinnacle Leadership Award from the East Point College Park Alumnae Chapter of Delta Sigma Theta Sorority, Inc. and was the first recipient of the 2006 Atlanta Urban Debate League Administrator of the Year.