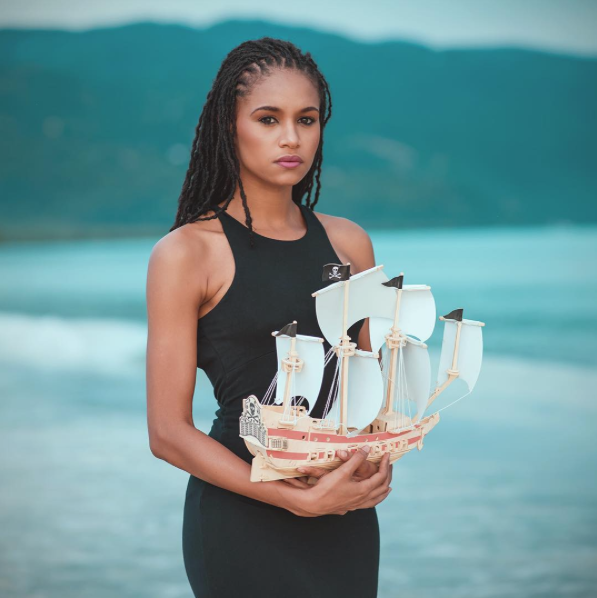 Dr. Sanetta Myrie got the attention of the world when she entered the Miss World Pageant with her gorgeous dreadlocks. She now hold the titles Miss World 3rd Runner Up 2015, Miss World Caribbean 2015, and Miss Jamaica World 2015. Dr. Myrie practices medicine at Mandeville Regional Hospital in Jamaica. Her other passions are dance, culture, and acting. We sat down with Dr. Myrie to find out what she has been up to since the pageant.

1. What has Miss Jamaica World done for you?
I entered the Miss Jamaica World competition because I wanted to represent the country on a national level. And that’s really the passion that is at the heart of it and why I am Miss Jamaica World. I am a proud Jamaican.
The Miss Jamaica World and the title itself, outside of giving me the love of the Jamaican people and putting me on that stage and giving me a platform where I can touch Jamaican lives and the world at large, has really allowed me to dig deep within myself to find what I have to offer the world and what I have to offer my fellow Jamaicans. And it definitely has pushed me to work that much harder to have purpose, to be useful. And I think that’s one of the biggest things it has done for me. A sense of purpose.

2. Did you enter into the Miss Jamaica Pageant before?
No, it was my first time entering into a nation pageant but I did pageants before. I did pageants at the University of the West Indies Mona, where I studied. I did two pageants, which I won. I did one for my hall of residents, Preston Hall. And then I went on to the Miss UWI Mona pageant, which is for the entire university, and I won that one in 2012. Then that’s really what gave me the confidence to enter as well as really got certain people in my corner which have been a big part of my journey. I’m so grateful to them. Just everybody for being there and really helping me to shine and do my best.

3. What do you expect to do from it? I know you have been traveling a lot. What do you expect from winning this competition?
Well definitely having this big of a platform and being able to have so many eyes on me, It’s allowed me to think of how I can combine the attention with my medical practice with other passions that I have, which is a passion for culture. I’m also a dancer. And I placed third at Miss World for my dance piece that I did.

4. Have you acted in any movies?
I’m actually in a couple of short films and I’m also supposed to be doing another upcoming short film. I’ve been in films at small film festivals, Cat Fest. A film I did recently called ‘Hang am I’ will be featured at Cat fest this month, next month in Jamaica. I’ve done quite a few films.
I’ve done a lot of stage performance because I’m a part of the quilt performing act group in Jamaica. So I’m big on the arts. I’m big on medicine. I’m big on all forms of healing and that really is what I hope to do for the rest of my life. To just be an ambassador for those causes.

5. I see how strong of a personality you are when you speak, you speak with a lot of confidence. What have people said about your hair, especially when you were in the beauty pageant?
Well a lot of people have asked me about my hair. Definitely in Miss World they were fascinated by it and a lot of people asked the question: Is it locks? Is it fashion? Is it religion? I have a rastafarian background, my dad, as well as a Christian background. So I’m deeply a spiritual person, but my locks are my identity. It’s not necessarily spiritual. It’s not necessarily fashion, as they would say. I’m most comfortable in my locks. I feel most beautiful in my locks. And it really does give me that confidence to shine as a queen. You know. I feel very royal and so what it has allowed me to do is stand out. And just have strong retention and convictions in my religion.

6. If you were trapped on an island for two days. What are two musical albums you would want to hear over and over?
I would definitely have to get one of Bob Marley’s albums, but I’m also thinking about Kia. I’m thinking about Catch a Fire. It’s just so hard to choose one, but definetly Bob Marley and Buju. Buju Banton and Bob Marley are definitely some of my favorite. I’m a reggae girl. I’m a reggae baby. I’m actually a purist when it comes to my reggae music and I love it old. I love it rootsy. I love it just pure and spiritual, not so much of the new age fusion stuff that they are doing. So definitely Bob Marley’s Legend and Buju Banton’s Soo Shilo.

7. Where do you get this kind of confidence? Is it mom or dad? Where do you get that from?
A lot of it has come from me just growing into my own person. I have a very diverse background. I was adopted. I grew up in the inner cities in Kingston and I was taken to the rural parts of Jamaica. Then I went to school in the city.

8. Did you go to St.Mary?
No, Westmoreland so I have a very diverse background. Uptown, downtown, round town. Being so diverse and being so adaptable has definitely helped me to understand who I am as a person.

Thank you very much Dr. Myrie and you have a nice day.
No problem.