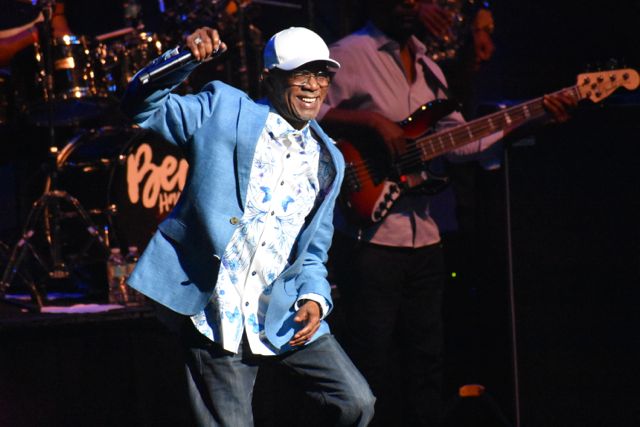 The Broward Center for the Performing Arts was certainly the place to be on Sunday, August 25th, as reggae music lovers and aficionados flocked to the multi-purpose entertainment complex in droves to witness a memorable show performance given by the one and only—Beres Hammond. Conveniently located in the Riverwalk & Entertainment Arts District in Downtown Ft. Lauderdale, the Broward Center featured a classy setting both inside and out.  There was valet parking outside for the long line of luxury vehicles pulling in, and a high-end bar inside where Beres’ fans were able to enjoy a cocktail or two and small plates before his show, while mingling to the sounds of a live DJ who was on the scene juggling a mixed bag of reggae and dancehall song classics.  Beres Hammond’s summer 2019 Never Ending Tour had kicked-off in late July in Danbury, Connecticut and subsequently made stops in a number of U.S. cities, including:  Baltimore (Maryland), Cincinnati (Ohio), Chicago (Illinois), Boston (Massachusetts), Brooklyn (New York), Philadelphia (Pennsylvania), Newark (New Jersey), Huntington (New York), Richmond (Virginia), Washington (District of Columbia), Norfolk (Virginia), Charlotte (North Carolina), Atlanta (Georgia), and Orlando (Florida).  With the Ft. Lauderdale, Florida show being the last stop on his 2019 Never Ending tour, the atmosphere was very lively—as the Au-Rene Theater inside the Broward Center was fully packed with fans eager to see Beres Hammond grace the concert stage, live and in-person. 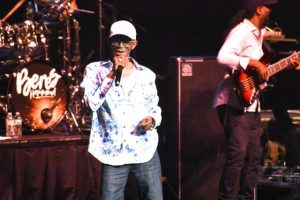 Clad in a pair of jeans, a white shirt splashed with sky blue butterflies and other effects, a sky blue sport jacket matching in tone, and his signature baseball cap (white), a Dapper Beres Hammond pranced onto the stage shortly before 9 o’clock pm to the roar of the reggae music thirsty crowd.  Quite frankly, it is indisputable that Beres is nothing short of a living legend where Jamaican culture and its coveted reggae music genre are concerned.   As it happened, Mr. Hammond went straight to work by unleashing a flurry of his most popular hits spanning over 40 years to present—after having started his much storied career in the early 1970s.  His song selections for the night included:  She Loves Me Now, What One Dance Can Do, I Feel Good, Come Back Home, Can You Play Some More, Putting Up a Resistance, Just a Little More Time, and Double-Trouble—just to name a few.  But then in the middle of his set, the audience went into an absolute frenzy when Beres called out his surprise guest—Marcia Griffiths.  Widely known and revered as the ‘Queen of Reggae’, Marcia Griffiths is a living legend and iconic songstress in her own right in having been a long time member of Bob Marley’s background singing and harmonizing group—the I-Three (which consisted of Rita Marley, Judy Mowatt, and Marcia Griffiths).  Marcia has also had an illustrious career in music spanning over four decades.  And who can forget her timeless and infectious ’80s hit, Electric Boogie (and the Electric Slide dance move that went along with it)?  So, there it was for all to see at the Broward Center for the Performing Arts; that is, a classic moment in which Beres Hammond and Marcia Griffiths performed their timeless hit, Live On, together as a duet. 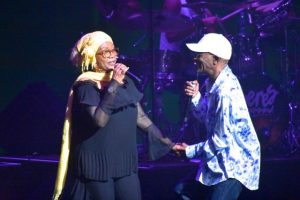 Beres then closed the fun-filled evening and his 2019 Never Ending Tour by performing yet another of his big hit songs—Rockaway.   And, during his recent sojourn in South Florida Mr. Hammond also was able to celebrate his 64th birthday in fine style at a club called Racket—located in the trendy and hip Miami arts district of Wynwood.   Happy Birthday, Beres!  And with that said, all of your fans the world over certainly wish you many, many more! 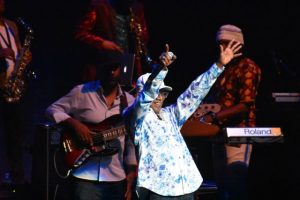