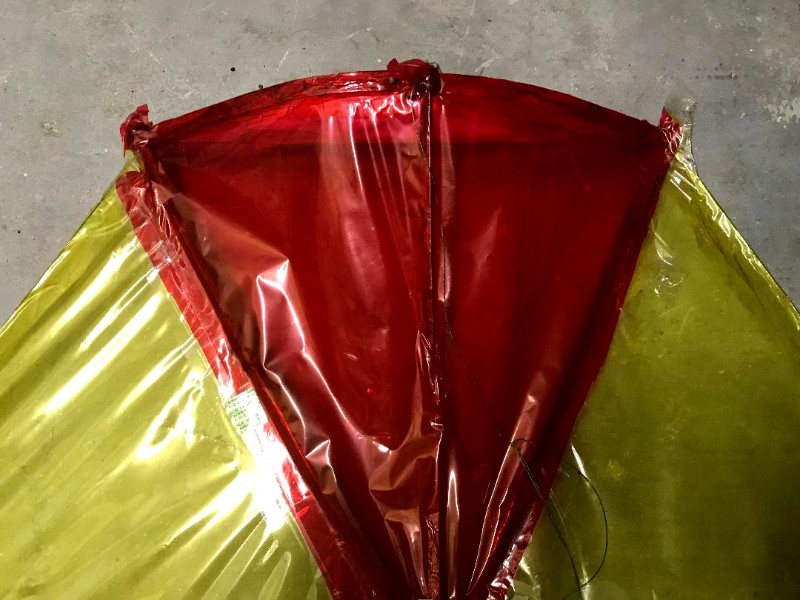 Occasionally I see a kite flying and reminisce about a big red bajie kite I had as a child while living in Jamaica.

I absolutely loved kites as an 11-year-old. I lived 5 doors away from the sea so the wind was never a problem. Summertime was the best because the whole neighborhood was filled with children. My brother and I were normally on a fence and/or roof flying a kite. You could see the little children who did not know how to make a kite with a frame flying a 100% paper kite. This could be a John Crow or H kite. The more popular frame kites were bajie kites. I was really good at making bajie kites. I would pick the most sturdy coconut leaf and would use English thread, which is the strongest. I would bug my mother to take me to Spanish Town where the stores sell the best kite paper. These types of materials were good enough to make a small kite but not a big kite. I had many of those & rumor had it that I provided the kites for everyone on the block. Bamboo was what I would need to make a big kite.

Well, there came a joyful summer when I got some Bamboo from the country. The bamboo was the length from the ground to my shoulder. It was like gold for me. I had dreamed about making a big kite many nights. I started planning immediately.

I cut up the bamboo into 5 pieces & sand them down a bit to make them smooth. I gathered all the other materials. I used a big red ‘plasticky’ bag for kite paper. I used nylon thread to string up the kite. I used Pattex brand glue to attach the kite to the frame. It took me about 4 hours to meticulously put the kite together. I used bedsheets for the tail. I would need a day to ‘set’ before I could give it a test run. I remember looking at the kite which almost as big as me with pure admiration as I put it under my bed. The next day my brother and I set out to fly the big red bajie. All the children in the neighborhood were out to see the biggest kite on the street fly. He was stationed on the roof of our next-door neighbor while I was on our home’s roof. He held the kite up high in the air with both hands and I pulled. The kite ascended in the air smoothly and I gave it ‘length’ (unreeled more string). The singer on the kite was making beautiful music. I could feel the power of the kite in the string. We had used two reels of thread to fly the kite due to our anticipation of the power. My brother was now standing next to me beckoning for a ‘turn’ to fly the kite. I did not mind, as I just loved admiring the kite. I also loved seeing the look on the other children faces as their kites paled in size to this one. That whole summer the kite was number one in the neighborhood. It was the brightest, the biggest, and had the loudest ‘singer’. Unfortunately, this ‘king of the block’ feeling would not last. I remember the day the wind jerked the kite so hard the string broke and the kite ‘bus whey’. My brother and I ran in the direction the kite had gone. Our search was futile. I had given the kite so much string that it could be anywhere. We came back to the neighborhood with our heads hanging to the jests of the other children who were happy the kite was gone. That summer we soon saw a few others imitators but nothing that could compare to my big red bajie.

About the Baiji Kite
The Jamaican “Bajie” kite is a flat style six-sided kite made with pastel-colored papers. They are typically 3’ tall, but can also be much bigger. The frame of the kite is either made from the stem of coconut leaves or bamboo.