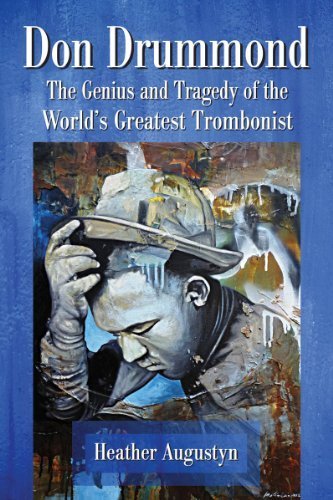 (They) need to Stop, and Think and Realize, Music is (his) Life – Beres Hammond

For Don Drummond Music was his tortured life.

As a writer,  it is not  often that I get to do a book review with which I have a personal and intimate connection.  American journalist/Professor Heather Augustyn has written extensively on Ska music’s roots and her biography, “Don Drummond the Genius and Tragedy of The World’s Greatest Trombonist

” affords me the opportunity to relive my post-colonial musical growth in Jamaica.  Some of the stories in Augustyn’s thoroughly researched to me on Don Drummond are stories my dad, Winston Smith, lived through and told me when I migrated to live with him in the United States in 1974. Don Drummond and my father were good friends.  Imagine my delight when Augustyn contacted me, after she read on Jamaicans.com my dad ’personal account of the night Drummond, in an insane schizophrenia-induced rage, murdered his other true love, talented dancer, Anita “Margarita” Mahfood, who seems to provide the support and love missing from Drummond’s life.

This book is a powerful and fascinating read for the scope and breath of drummond’s life it covers. With the foreword written by Trombonist Delfeayo Marsalis, an avid fan of Drummond’s musical prowess, and also a member of the legendary Marsalis, jazz family. Delfeayo correctly notes the book is “a comprehensive biography of a brilliant musician and his lover who forever shaped the course of ska, reggae, and popular music worldwide despite poverty, class separation, mental illness, racial politics, exploitation, and sexism that resulted in murder”.

For me as a music journalist, reviewing Drummond’s biography connected me to the man who lived with his mom next door to my dad in Allman Town,  while evoking  my childhood memories of listening to and idolizing the revered one “Don D”, as he was popularly known in the 1960’s. Celebrated by many but heard of by too few, Drummond  is a pioneer of ska  and the leader of the legendary Skatalites.

As a child, I knew the brilliant music Don Drummond composed as part of my musical education listening on the radio and on my parents’ stereo. I had no idea this music I listened to was coming from the man across the street. What I did know , was the standard of excellence for a trombone player was Don Drummond. As a child,  I can’t recall any other instrumentalist (or musician, for that matter) whose name came remotely close in popularity to Don D.  D0n Drummond was the epitome of a great Jamaican musician and composer. Compositions with provocative titles like  “Man in The Street”, “Confucius”, “Far East”, the autobiographical  “This Man is Back”, ode to Cuban revolutionary, “Fidel”, “Eastern Standard Time”, “ Schooling The Duke”, “ Addis Ababa”, and many others, this great ska artist and composer was talked about in the same breath as the great Jamaican vocalists of that time.

My dad still speaks with remorse and regret about the tragic act that Donald, the name my dad affectionately called him, committed that changed Drummond’s life forever. When Winston Smith, who was travelling in the car with Lennie Hibbert dropped off Mahfood at the home she and Drummond shared, he known Donald was home,Drummond was scheduled to play playing at club that night.  Given Don’s and Margarita’s tumultuous history, he would have accompanied her inside. My dad is convinced history would have written a different narrative for Drummond.

Don Drummond’s short-lived, tragic life is the story of an accomplished musical genius, whose triumphs with little support are unheralded. Drummond was acknowledged by musical giants such as the great Glenn Miller, jazz pianist George Shearing, who rated Drummond as one of the top five trombonists in the world, Jimmy Knepper, Curtis Fuller, Jack Teagarden J.J. Johnson, jazz singer Sarah Vaughan and Dave Brubeck, as one of the five best trombonists to ever play the instrument. It is ironic because it represents the loss of possibility, which could have been limitless because unlike his other Jamaican counterparts, Monty Alexander and Wilton Gaynair, Drummond was not able to benefit from the international success of ska music.

“Now you can have Ska, Rock Steady and Reggae and whatever the other creative music is, by… is just that one man create and everyone a follow” – Bob Marley.

Ska, which comes from mento and calypso music, combined with American jazz and R&B is a Jamaican music genre that originated in the late 1950s. When music lovers around the world think of Ska, the names of ska/punk groups like NoDoubt, Sublime and the Specials with ska infused hits come to mind. Ska, Dub, Rock Steady, and Reggae  are Jamaica’s musical  gifts to the world. However, as Bob Marley accurately noted in 1975, “Now you can have Ska, Rock Steady and reggae and whatever the other creative music is, by… is just that one man create and everyone a follow”. Jamaica has abandoned most of their musical genre save reggae. Jamaica has also abandoned many of its musical geniuses.

As is the mystery with all unheralded genius, it begs the question: Who is this reticent, eccentric, melancholy, emotionally disturbed musical genius named Don Drummond?

Enter Heather Augustyn, a white musicologist from America, to write an imitately touching and thoroughly researched biography, “Don Drummond, The Genius and Tragedy of The World’s Greatest Trombonist”. In it, she chronicles his musical odyssey.  From the youthful days of this seminal impoverished figure’s life and time of  his death in the Bellevue mental asylum at age 35, the author, with a great deal of effort, energy and persistence, digs hard and deep for  her study of this legendary yet forgotten Jamaican musical trombonist.  She gives a first-hand account of Don’s story from the perspective of those who knew him, including his childhood friends, like my father, who is quoted extensively throughout the book, his schoolmates, band mates and musical peers, the medical staff who treated him, his lawyer, former Prime Minster P.J. Patterson, and teachers who shaped him. Augustyn deserves credit for the the complete portrait she provides. Augustyn’s biography successfully situates Drummond, a musical giant and pioneer of Ska, in the pantheon of great musical innovators and on the world of music landscape.

The book is intriguing as well as compelling (and at times frustrating) because it highlights how class and race marginalization led to little being known of or understood of the greatness of Don Drummond. Ironically, despite making his life a holy hell, those sociocultural and economic factors greatly impacted his greatness.

In “Don Drummond, The Genius and Tragedy of The World’s Greatest Trombonist”, you get a clearer sense of who Don Drummond is and why he is important. The books is a reminder of the debt of gratitude we owe to this hugely gifted, melancholy and fragile soul of genius, and why we should honor and commemorate his life and legacy with dignity and respect.

The most eloquent explanation of Drummond’s life and why he was misunderstood as one journalist wrote, is that his life was a ‘story of music, passion and hardship; one of madness and murder.’ Drummond’s genius remains so special and memorable to so many because he was more than a brilliant musician. His music possessed an extra quality or, as Bob Marley refers to that quality, “a feel” or “a soul”.

The sheer beauty and passion that he expressed so eloquently through his music, coupled with an intensity of emotion, was capable of reducing an audience to tears. On several occasions my dad said he witnessed patrons break down in tears during Drummond’s set.

In contrast to my father, who felt that if events had taken a different turn that tragic night, Drummond’s life would have been different, given the decided lack of appreciation shown to so many of Jamaica’s music icons, I wonder. However, given the relative success of so many of his peers who had the opportunity to travel abroad to develop their talents,  Augustyn’s exploration of whether or not more recognition would have led to increased opportunity and  inevitably, money that could have made things different or better is intriguing. Had Drummond given had the opportunity to play and record with jazz greats like Charlie Park,  Sarah Vaughn, Miles Davis, Duke Ellington or even Count Basie, one could only imagine the great music he would have composed. Being in the company of these inspired geniuses would no doubt have  afforded him the chance to plunge into the depths of his unfathomable music talent. Of the many stories my dad told me, one stands out in this regard. He was walking through the Race Course (now  National Heroes Circle). Don was sitting under a tree eating dirt from the middle of his hand. He said, “Winston, come here”, then proceeded to take a book  from his back pocket. The book contained all the great jazz musicians. Don proceeded to tell my dad what made each musician special and great and named the ones he felt he was either as good as or better than.  Drummond was certainly aware of his talent.   He was also painfully aware of the socio-economic circumstances he was born into.