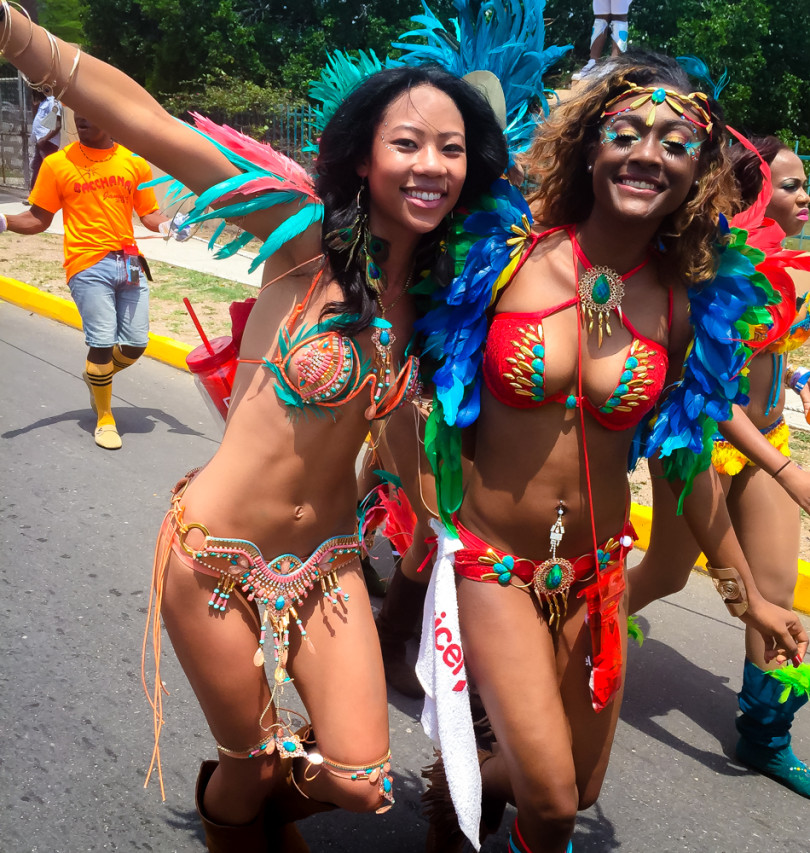 So Carnival or Coachella?  Jamaica Carnival won the draw this year. My sisters said lets go and I love spending time with them, so I of course said YES!!!  :))  What’s Carnival you ask? Other than a giant cruise ship, Carnival is a whole different experience…check it out  :p

Shout out to BajanTube for not only attending Jamaica Carnival 2015, but for snapping this cool candid! 🙂  BajanTube has tonnes of amazing Carnival pics – go have a look!

Ready to do road with my two gorgeous sisters!

Hands up! Feel the vibe 🙂

Picture this… Bass line pumping, the streets flooded with gorgeous bright masquerade feathered costumes – a fantasy scene come to life. The feeling you get from the music, the vibe and the rhythmic movement of the crowd takes over as bodies and waistlines move in unison.   The tassels and sparkling costume jewelry dance around as guys and gals from all walks of life chip their feet to the hypnotic beats under the April island sun.  But you don’t feel the heat and if you look around, not many are tired or sitting down resting.  Rather the music surges through your veins giving you a second wind to complete the 10km parade route (according to Google Maps).  There are usually a few thousand participants each year and tens of thousands of spectators lining the route through the streets of Kingston.  You want to experience this! #Phenomenal

Gotta keep hydrated – I was never without my water!  Photo creds here go to Glympze.

Lookie who I ran into guys…Hi Kaci!!! This is Kaci Fennel, Miss Jamaica and the much talked about Miss Universe 2015 finalist. Thanks for the pic gorgeous 🙂

Another good friend I ran into on the lunch break. 🙂 Hey Mai #PrettyOnFleek ♡

As I reflect, I feel as if I’m having withdrawal (or as the Trinidadians say ‘Tabanca’, which is the same feeling experienced  when someone is love sick!)  lol. This is the Caribbean…in every essence of the word.  You see, Carnival has its origins in Egypt until it was much later adopted by the Europeans as the festival of “Carne Vale” held before the first day of Lent. The popular festival spread to other regions in Europe, such as France and Spain, until it was later brought to the Americas by European slave traders during the colonization period. The slaves were banned from participating and so they would celebrate in their backyards with traditions and rituals infused from African heritage.  On emancipation, the freed Caribbean slaves transformed the original European festival into a celebration of life and freedom!  It is the Caribbean Carnival form that is today exported to large cities all over the world.  The Caribbean Carnival is the result of a ‘not-so-nice’ time in history that spawned a glorious festival that brings world cultures together in a celebration of love, life, colour and unity.  To quote the famous Jamaican motto, “out of many, one people”.

A people without the knowledge of their past history, origin and culture is like a tree without roots. – Marcus Garvey

The above photo is courtesy of DACX Photography.  Amazing work guys, thank you so much for sending me this shot.  My iPhone pics can’t compete 🙁

What an experience!   Go check it out…I’m there again in 2016!  And maybe even Trinidad Carnival if I can squeeze it in 🙂